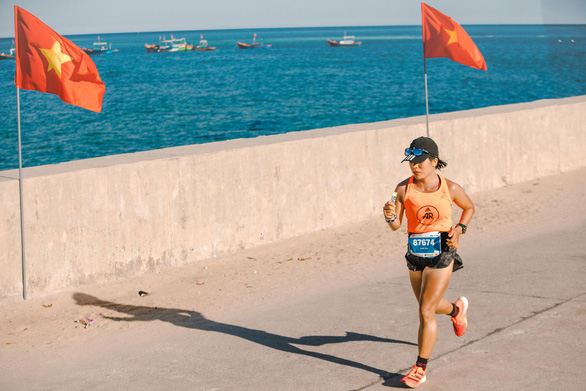 These long distance and ultramarathon runners are not professional athletes, they are merely everyday women looking to shed some stress and triumph over their own limits.

“There is nothing as valuable as your health," said Nguyen Xuan Diu, a freelancer in Ho Chi Minh City.

"Running each day helps me balance my life and avoid negativity.

“I lace up my sneakers and hit the road whenever I feel tired.

"It releases all of my bad feelings.”

Diu first began running about two years ago after realizing that stress was causing her to put on significant weight.

In those two years, she has gone from getting winded after two kilometers to completing a full-length marathon.

Diue’s friends were so surprised at her transformation that many of them even began asking her for advice on how to get in shape.

“Some of them have even become as passionate about running as I am!” Diu said.

She owes much of her running success to AR Saigon Club, a group of runners that meets regularly to run together and share knowledge.

“My body has changed so much [over the past two years]," Diu shared.

"I can run faster and longer.

"I can even run 42 kilometers in just four hours and 11 minutes."

During the past two years, Diu has entered a race each weekend in cities across Vietnam, including Ho Chi Minh City, Hanoi, and Da Lat, but her most memorable race was on Ly Son Island in June 2020.

Despite a heatwave blanketing the island, she joined the 21-kilometer category and started the run, but disaster struck about 15 kilometers in when she began cramping.

“I wanted so badly to run between the two Vietnamese flags at the finish line that I became empowered to complete the race," Diu recalled.

"I was even lucky enough to win the amateur 21-kilometer category."

Do Thi Nguyet, 35, is another Saigonese runner who has developed a passion for the sport over the years.

Nguyet, who runs a pharmaceutical company, began running six years ago as a way to keep fit after moving from Hanoi to Ho Chi Minh City.

Part of her passion, she said, was fueled by the people she met after joining the Viet Runners Club.

“I made friends with many people who share a love for exercise and running,” Nguyet said.

"We practice together each week and even enter competitions."

On average, Nguyet participates in one race each year.

“My most unforgettable race was the Berlin Marathon in Germany, where I competed on behalf of the Adidas Runners Saigon Club,” Nguyet shared.

“It was an extremely emotional event for me.

"I spent most of it worrying about my friends and the other runners because the weather was cold and rainy, but that didn’t stop me from achieving my personal goal.”

A self-proclaimed ‘weakling,’ Suong has spent the past year growing as both a human being and a runner.

“Thanks to running, I am no longer weak. I’m stronger and healthier,” Suong said, adding that running has opened her eyes to the importance of diet, weight, and overall health.

Many of the competitions Suong competes in revolve around charitable causes, such as the 'Running for the Poor' event sponsored by the Bank for Investment and Development of Vietnam, better known as BIDV, as well as another organized by the Southern Power Corporation to support Mekong Delta farmers during a drought.

“Running helps me appreciate my life and love myself and those around me,” Suong shared.

Nguyet has become a coach instructing newbies who want to start running.

To her, running for health is the premier cause, but apart from that, she can also share positive energy with others while doing exercise together.

Many of them asked their friends and colleagues to run with them.

Lam Ngoc Quy, 39, a mother of two children, has tried to arrange all her duties to spare time for running.

“At first I ran for health,” said Quy.

“But the more I run, the more I love it, so I asked many of my friends to run with me.”

After just two years of running, Quy has conquered many challenges like distances of 42 kilometers or even a trail marathon of 70 kilometers including walking and running through mountainous terrain that could last up to 24 hours.

“In my opinion, running helps us train our will very much as we will be easy to give up in the middle because of fatigue,” Quy said.

“I think only of the finish line and urge myself to continue stretching my steps on the way.

“In the competitions that I took part in for a charity cause, I felt that I was more encouraged to finish the race."

Khanh Van has also completed an achievement of 155 kilometers to throw her support behind a campaign launched by the Ho Chi Minh Pioneers' Organization to help the poor and underprivileged people.

“After registering for the campaign, I must force myself to complete the goal each day without anyone reminding me,” explained Van.

“In fact, my activity becomes more meaningful when I can do something to help others with it."

The running movement has blossomed in recent years in Vietnam. To runners, running is not only a useful exercise but also a small contribution to society in some way.

There are varied charity organizations that have been financed via running competitions such as Operation Smile,specializing in helping poor disabled children with cleft lip or cleft palate; NewBorns Vietnam, dedicated to helping infants; and Vietseeds and Run For Future, both among funds that help poor youth to have a chance to keep studying.

Nguyet is taking part in the Run for The Oceans, a global movement designed to raise awareness of marine plastic pollution.

An ‘addictive’ kind of sport

To female runners, running is as addictive as it is easy to learn.

It appeals to the runners at the very first as they can meet with a big community of people who share with them a love for running or jogging.

They will find an interesting world with people who are mostly positive, friendly, and easygoing.

“Sometimes we make appointments only due to remembering friends and wanting to meet with them,” Nguyet said.

“When you have a habit of running, it will be extremely difficult to stop it.

"I feel uncomfortable not being able to regularly run sometimes."