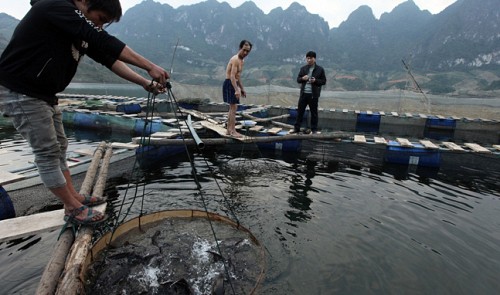 While local farming businesses only supply two to three tons of sturgeon to the market every day, up to 15 tons of the fish are smuggled from China into the country on a daily basis.

Two to four tons of these illicitly imported products are then transported from Hanoi to Ho Chi Minh City via air freight, according to the Vietnam Coldwater Fish Farming Association.

“Both CITES, a wildlife protection organization, and the local animal health agency assert that they do not license fresh sturgeon imports to Vietnam,” said Tran Van Hao, chairman of the Lam Dong Coldwater Fish Farming Association, adding that smuggling is “the only way for the fish to enter Vietnam.”

Once they arrive in the city, the smuggled fish are distributed to restaurants that have reserved orders with the suppliers.

It usually takes sturgeons from one year to 14 months to reach the 2-kg weight, according to sturgeon farmers in Lam Dong Province.

But for Chinese acipenser, the period is only six to seven months thanks to weight-adding chemicals, they said.

Some traders of Chinese sturgeon are willing to admit that they sell smuggled products, said Tuan, who runs a restaurant that serves sturgeon in District 3.

“They said only that Chinese fish are cheaper prices, but asserted that their quality is just the same as the local products,” he said, adding that he in fact ended up “getting complaints from customers over the poor quality of the fish.”

Nguyen Van Toan, director of Truong Toan Co Ltd, a sturgeon farming company, said the only way to tell the difference between smuggled Chinese fish and locally grown fish is to taste them.

“The Chinese fish is always full of water and their flesh is crumbly,” he said.

Toan also warned that the fish may contain residues of toxic substances, as the smuggled products do not have to undergo tests.

Besides these factors, the local industry is also hurt by the loose management of local authorities, said Le Anh Duc, CEO of the Vietnam Sturgeon Group, the country’s largest sturgeon supplier.

“The illicit products are not subject to any taxes, and are falsely sold as Vietnam-sourced to dupe consumers,” he said.

“We are not against Chinese sturgeon, what we need is for the fish origins to be stated clearly for consumers to choose.”

Tran Cao Muu, general secretary of the Vietnam Fisheries Association, admitted that Chinese sturgeon are increasingly being smuggled to Vietnam.

“Some Chinese traders have recently colluded with sturgeon farms in the north to ‘launder’ the fish origin,” he noted.

Two businesses in Lai Chau and Yen Bai are functioning as “a transshipment station, through which the Chinese fish will become Vietnamese fish,” Muu said.

As this dishonest business is affecting local sturgeon growers, the association has called on the police to crack down on it, he added.