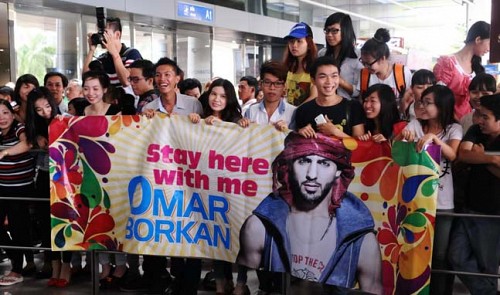 These days, the media seem to shift focus from murder and rape to the male physiques, in particular of a man from the Middle East, someone deemed to have been deported from Saudi Arabia for being “too handsome”.

What is the truth? According to Tuoitrenews, Omar Borkan Al Gala was never deported at all. He was just complained for making his way into the family section of an event and was dancing inappropriately. He then was taken aside by members of the national guard, questioned but was not asked to leave the event, let alone the country.

Anyway, the false news catapulted him to fame. The hottie even claimed that a secret admirer gifted him a Mercedez as she (or he) admired his looks. Now thanks to all that, he was greeted as a celebrity in Ho Chi Minh City, complete with banners and giggling girls.

But looks can be deceiving. When he arrived at Tan Son Nhat airport, the man looked frail and unattractive. It certainly must have disappointed a huge number of Vietnamese female fans who waited impatiently at the airport to ogle at this Omar in the flesh.

First, shame on them, the fans, for hailing him as a hero. A video of them holding banners, giggling furtively or shouting his name out loud as the heartthrob passed by can be seen on the Internet. What? Didn’t they have something to do at home? Why did they greet him this way? What is Omar’s talent and accomplishment?

I can safely answer that this man has no talent at all. If he had it, he would have massively and exaggeratedly shown it on Facebook (as he has done with all the retouched photos).

What about accomplishment? None, apart from the fake deportation news.

So why was this guy invited to Vietnam in the first place? The only possible answer is his dashing good looks on Facebook, of course with the help of Photoshop as all those present at the airport now know.

Beauty should be respected but not to this degree. Beauty must come hand in hand with intelligence, with talent. That’s why all beauty pageants have a question and answer section. Please do not idolize mere appearance. This man has not won any contest nor demonstrated his intelligence.

By the way, I didn’t see the media mentioning his education. He was just described as “the heartthrob expelled for being too handsome”. Sometimes, he was referred to as a model, actor, photographer or poet.

Oh my God, has he signed any modeling contract? Has he published any poems and earned royalty from that? And which movie did he star in? It turns out he grabbed a movie contract AFTER the deportation news which turned out to be false. So is he worthy of all those titles?

So stripped bare of all that, the man is just a normal, nice guy who likes to smile and act quite femininely. How many men like that are there in Vietnam?

The organizer - The Gioi Gia Dinh (Families’ World) magazine - even went to ridiculous lengths to hold an auction to sell Omar’s personal belongings. A meal with this dude was sold to a 'lucky' Vietnamese lady for a little over a thousand dollars. Wow.

Then, the Luu brothers were also invited. This is the first time I’ve heard of the name. On researching, the triplets did star a very very minor role in a movie called Pacific Rim. Apart from that, they are relatively unknown. Again, what are their talents? And what do they intend to do in Vietnam? Can they perform magic, do some circus skills or will they just sit there and smile for the camera. Is it worth it? Is it media-worthy?

There are already thousands of shining examples right inside Vietnam of people doing good deeds, of poor students struggling to survive tuition fees, of toiling parents working night and day to support their kids, of people selling kidneys or thousands of promising scientists who saw their careers cut short due to financial constraints….

Why have we not invited them and given them a podium to talk, share their story and inspiration?

Shame on the magazine for organizing such a futile event to boost its profile. Shame on the media for covering and updating it as if he were some kind of world savior. Sensationalizing beauty and turning it into an event, a charity event for PR purposes or any purposes is not culturally refined. Please don’t get me wrong: I have no grudge against Omar or the triplets.

Next time, when you invite some foreigner to Vietnam, remember to check their backgrounds to see whether they are who they are as described on the Internet or just a bloated figure. For a PR trick, someone like Nick Vujicic is wholly better. If you want to get a hottie, pick an established hottie like Miranda Kerr or, if you can, Cristiano Ronaldo. Otherwise, some man whose fame was hinged on a lie like this Omar’s makes the host country a laughing stock. This applies to the inconspicuous Luu triplets.

The views and opinions expressed herein are those of the author - Joe T. Pham - and do not necessarily reflect the position of Tuoitrenews. Joe T. Pham is a Vietnamese-American living and working in Ho Chi Minh City.