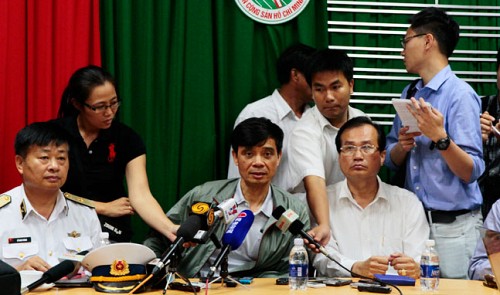 The hunt for missing Malaysia Airlines flight MH370 entered its sixth day today. From the beginning of the incident, Malaysian authorities have failed to actively cooperate with Vietnam in handling the issue, Vietnamese Deputy Minister of Transport Pham Quy Tieu told local media on Wednesday.

Deputy Minister Tieu, chief of the Vietnamese search mission, returned yesterday to Hanoi from the search command center on Phu Quoc Island after airplanes and rescue ships deployed for the search operation again failed to spot any sign of the Boeing 777 that mysteriously vanished five days ago.

Upon his return, Tieu addressed a media briefing late Wednesday, as on the same day Vietnam scaled down its search mission following new reports over the last known location of the jetliner.

According to statements from Malaysian authorities, flight MH370 might have been last tracked somewhere off Malaysia’s west coast on Saturday, rather than the waters between Malaysia and Vietnam, the area that has been scoured by ten countries over the last five days.

Speaking at the press conference in Hanoi, Tieu said that the Malaysian side had not actively cooperated with their Vietnamese counterpart from the very first day.

“This is a serious and mysterious incident,” the Thursday print edition of Tuoi Tre Daily Newspaper quoted the search chief as saying.

While Vietnam always publicized any new reports of found debris suspected to relate to the missing plane, Malaysia did not fully provide its newly collected information to Vietnam, Tieu said.

“The plane belongs to Malaysia, so it should have been the main source of information, but it has yet to actively cooperate with Vietnam from the very beginning of the incident,” he remarked.

Shortly after detecting that flight MH370 disappeared from radar screens when it was about to enter the Vietnamese FIR (Flight Information Region) on Saturday, the Ho Chi Minh City Area Control Center reported the issue to FIR Malaysia and nearby units, the deputy minister said.

Vietnam then activated its primary radar system to detect the plane and notified Malaysia Airlines officials but received no responses, Tieu added.

On Wednesday, Vietnam dispatched nine planes and helicopters and eight navy and coast guard vessels to continue the search for the missing plane in its waters, but eventually “there was no new information,” admitted Le Minh Thanh, deputy commander of the Vietnamese Navy, at a press conference on Phu Quoc.

Thanh also refuted the rumor that the search mission is costing Vietnam around VND20 billion (US$940,000) a day.

“That is inaccurate information,” he said.