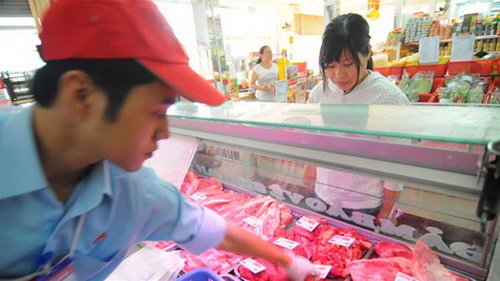 Nguyen Thanh Hien drops by a butcher’s store near downtown Ho Chi Minh City every Sunday to buy Australian beef to treat her family members on the weekend.

The District 1 resident used to buy beef from cattle raised in the outlying district of Cu Chi, but the imported meat has won her favor for nearly a year, she said.

“Aussie beef is softer while I don’t have to worry about food safety,” she said, adding the imported beef can be found anywhere, from any supermarket to butcher’s stores citywide.

“I’m not exaggerating, but it is much easier to buy Australian beef than domestic meat,” she concluded.

Vietnam has surpassed China to become the second-largest importer of Australian cattle, and retail stores across the southern metropolis have been replacing domestic beef with Australian meat over the last year.

Most of the Aussie beef on sale in Ho Chi Minh City is produced from live cattle imported from Australia, a trend that emerged in Vietnam’s big cities around two years ago.

Vietnam imported 129,273 cows from Australia in the first eight months of this year, up 31,000 cattle compared to the full-year figure in 2013, according to the Vietnam Livestock Association.

This is not to mention the hundreds of thousands of cattle from Thailand, Laos, and Cambodia that are brought to Vietnam via the central and southwestern borders, according to the association.

In June Vietnam also opened the door to Japanese beef, enabling more than 20 meat exporters from Japan to officially distribute the famed Kobe beef in the country.

Nearly $3.3 million worth of meat imports from the EU have also arrived in Vietnam in the Jan-Sept period, seven times the amount imported in the same period last year, figures from the General Department of Vietnam Customs show.

EU meat imports to Vietnam are expected to continue rising in the future, as the country is now a key market for European meat exporters, according to local industry insiders.

In July last year, the Union of Producers and Employers of Meat Industry, a Poland-based trade association of meat-industry related entities, initiated a 36-month campaign to enable high-quality European pork to enter three key markets, including Vietnam, South Korea, and the U.S.

Vietnam’s poultry industry is also being hurt by imported products which have arrived in Vietnam in increasing quantities at cheap prices.

“The imported processed products are as cheap as the live animals raised domestically, so we cannot compete,” the director of a livestock company in the southern province of Dong Nai said.

Vietnam imported more than $85 million worth of frozen meats from 19 markets in the first nine months of this year, up $12 million compared to same period last year, according to the General Department of Vietnam Customs.

Most of the products are chicken heads, wings, feet and animal organs.

The import prices of these products range from only $0.7 to $1.5 a kg, enabling them to be favored by companies that supply meals in large quantities for schools, hospitals, and factories.

Nguyen Dang Vang, chairman of the Vietnam Livestock Association, said he has repeatedly called on relevant agencies to reduce imports of frozen meats, especially animal organs, or set up stricter import barriers to protect the domestic livestock industry, as well as consumer health.

“But things remain the same,” he said.

“Animal organs contain many toxic substances and importing them is no different from bringing toxins to the country.”