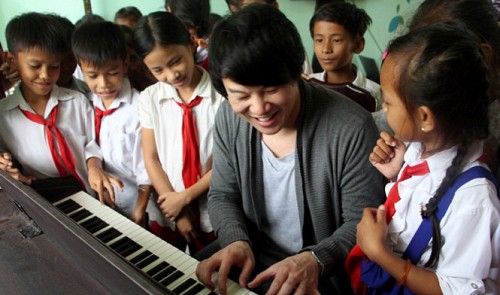 Titled “We The People for Global Goals,” the clip is part of the United Nations campaign “Global Goals,” which was announced at the beginning of last month.

The “Global Goals” campaign aims to both make the goals famous and push for their full implementation.

According to the UN, if the goals are famous and people care about what has been promised by the politicians, it will greatly increase their chance of being implemented.

Singer Thanh Bui, who joined in presenting the fourth goal of quality education, expressed his pride being in the video with the world notables.

“This motivates me to work harder in education, especially to improve music education and performing arts in Vietnam,” he said.

The singer plans to speed up the progress of the music education foundation he is working on in hopes that all children in Vietnam, including disadvantaged kids, will have the chance to get access to music.

“Representing Vietnam’s image, I just want to try my best to call on as many people as I can to help make a better world, as the campaign’s message says,” he said.

Earlier, Thanh Bui was an ambassador for the energy saving project Global Power Shift and a campaign to protect rhinos in South Africa.