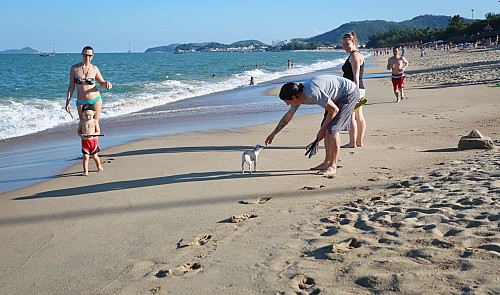 Local travel firms have been on tenterhooks over a gloomy outlook and a possible slump in Russian arrivals after three major Russian tour organizers have not had their Vietnamese permits renewed.

Three dominant players in the packaged travel industry for Russian tourists, namely Pegas Touristik, Anex Tour and Coral Travel, are among the 19 Russian tour operators that Rosturizm – Russia’s Federal Agency for Tourism – has excluded from the federal register as of January 1, 2016, because of their association with Turkish businesses, according to Russia's TASS news agency.

The ‘bad news’ has triggered further concern among industry insiders amidst forecasts of a sharp drop in the number of Russian visitors to Vietnam.

Statistics from the Vietnam National Administration of Tourism reveal that the three companies have historically been responsible for approximately 70 percent of Russian tourists to Vietnam.

Dmitry Gorin, president of the Association of Tour Operators of Russia (ATOR), told the Russian press that the companies excluded from Rosturizm’s register are now not entitled to organize tourism activities in the European country.

The news has come during peak season for Russian holidaymakers, who frequently travel abroad from October to March in a bid to escape arctic weather at home.

The general director of a four-star resort in Mui Ne, a famed tourist spot located in the south-central Vietnamese province of Binh Thuan, voiced concerns over the news as Russian tourists make up the majority of his clientele.

According to Vietnamese travel agencies, worsening economic conditions and the weakened ruble caused the number of Russian visitors to Vietnam to plummet during most of 2015, with the situation not improving until October last year.

The majority fly from large Russian cities to tourist attractions in Vietnam including Cam Ranh and Phu Quoc, mostly on large Boeing jets, with 250-300 passengers aboard each one.

Cam Ranh and Phu Quoc are located off the south-central province of Khanh Hoa and Kien Giang Province in the Mekong Delta respectively.

There have been times when Cam Ranh International Airport received four to five charter flights each day, amounting to over 1,000 passengers, with their individual stays averaging 12 days.

Hoang Thi Phong Thu, chairwoman of Pegas Misr Travel Vietnam Co. based in Khanh Hoa, which also receives a large number of Russian tourists from Pegas Touristik, revealed that the operator sent nearly 130,000 Russian tourists to Vietnam in 2015 alone. This amounts to a significant portion of the 339,000 Russians who arrived in Vietnam last year.

As of January 9, Pegas Misr Travel Vietnam Co. had received 11,337 holidaymakers from the European country sent by Pegas Touristik.

The Vietnamese firm plans to receive up to 15,000 Russian arrivals in January this year.

Meanwhile, the owner of a resort in Khanh Hoa which mostly serves Russians pointed out that the number of Russian vacationers to the province is not comparable with that of Chinese tourists.

However, based on their longer hotel stays, which usually average 12 days, compared to their Chinese counterparts who typically stay for three or four days, Russian clients represent a much more valuable segment of the market for operators.

“Our business will be seriously hurt if fewer Russian tourists travel to Vietnam,” the resort owner lamented.

No cause for concern?

Despite the decline, several insiders have tried to allay Vietnamese tourist operators’ worries.

Yuri Barzykin, vice president of the Russian Union of Tourism Industry, has confirmed to the Russian press that these hurdles can be overcome as the three excluded Russian tour providers will still be able sell their packages through other registered legal entities.

N., investor in several resorts and chair of a travel firm specializing in the Russian market, said though providers will certainly experience a dip in Russian arrivals initially, they should not be overly worried as demand for travel in tropical countries with gorgeous beaches like Vietnam remains huge.

After the Russian company went bankrupt in 2012, the resort suffered a decline in Russian arrivals for only a while before Pegas Touristik and other tour operators took the opportunity and began sending their customers to the Southeast Asian country.

Thu, the chairwoman of Pegas Misr Travel Vietnam Co., also disclosed that her partners in Russia had confirmed that they would quickly move their clients to legal subsidiaries and establish new companies to continue sending tourists to Vietnam.

At the time of writing, Pegas Touristik’s clients are still being brought to Vietnam on charter flights via legal partners in Russia, Thu noted.

Le Van Nghia, director of Nhat Minh Co., asserted that other players will definitely jump into a large, promising market like Russia.

She predicted demand for Vietnam to soar as the Russian government has banned local tour operators from sending their clients to Egypt and Turkey.

Nghia stressed that reasonable tour prices and better promotion of Vietnamese scenic spots to Russians   will be integral to Vietnamese providers’ success, as many Russian firms still fail to introduce the Southeast Asian country to their clientele, unlike other members of the Association of Southeast Asian Nations.

“I don’t believe that fewer Russians will vacation in Vietnam since they have always flocked to Thailand,” he concluded.

Vietnam has enjoyed strong growth in Russian arrivals over the past few years, with the European country one of the ten key markets for the Vietnamese tourism sector.