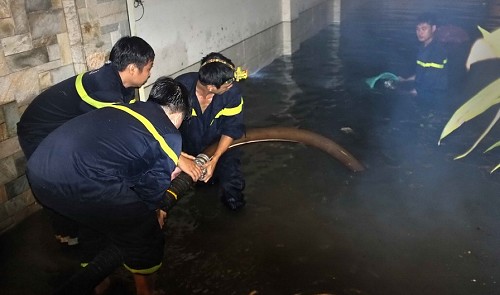 One Ho Chi Minh City leader has brought up the ineffective solutions to flooding in the southern metropolis and called for the problem to be permanently solved in the future.

Discussions over inundation and its serious impact on the lives of residents dominated a meeting on socio-economic conditions organized by the municipal People’s Committee on Monday.

Nguyen Thanh Phong, chairman of the municipal administration, expressed his concern over the inefficient measures used to cope with flooding, especially after recent heavy downpours.

A torrential rain, with its rainfall topping 159 millimeters, struck the southern hub on Friday last week, submerging 31 routes, immobilizing traffic, and shutting down the operations of many local businesses.

Many flights at Tan Son Nhat International Airport were delayed while others had to land at aerodromes in Thailand and Cambodia due to the severe inundation.

Firefighters had to be dispatched to many buildings to pump floodwater out of their basements, Chairman Phong stated, adding that he had been unable to contact any force specializing in flood control in many affected districts.

In his defense, Nguyen Ngoc Cong, director of the Steering Center of the Urban Flood Control Program in Ho Chi Minh City, said that the inundation on several streets was a result of rubbish blocking drains.

The serious flooding at Tan Son Nhat Airport was also attributable to a similar reason, according to Cong.

About 255 houses and constructions were encroached on, compromising the sewerage and canal systems vital to the relief of floodwater in the city, the director stated, adding that the issue had exacerbated the impact of flooding.

He admitted the limitations of current flood control efforts but asserted that there had been no negativity in the execution of such projects in Ho Chi Minh City.

Following the explanation, Chairman Phong decided that all existing problems must be solved within September.

Officials of the People’s Committee, including the chairman and his deputies, will directly monitor the situation at flood control projects in the city and deal with constructions infringing the city’s drainage system, Phong said.

“I demand that a positive change be made. This recent incident is unacceptable and cannot happen again,” he said.