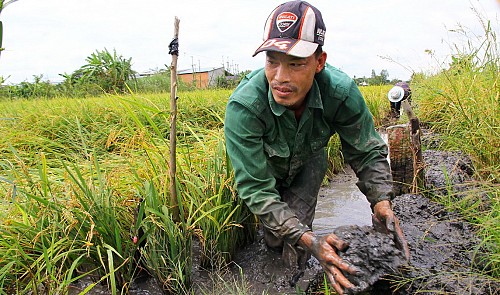 Farmers in Vietnam’s Mekong Delta are facing immense challenges after their crops and fruits were destroyed by unseasonal rain, with the downpour on Thursday afternoon being the most recent.

The abnormal heavy rain that hit a large portion of southern Vietnam on Thursday afternoon has taken its toll on the agriculture operations in the delta, dubbed the ‘rice bowl of Vietnam,’ leaving local farmers working relentlessly to save their crops.

According to Vo Huu Thoai, deputy head of the Southern Fruit Research Institute (SOFRI), the unseasonal rain has damaged crops and fruit trees as well as creating a perfect environment for pests to multiply.

Many rice farmers in the Mekong Delta have been caught off guard by the torrential rain just about a week into the Lunar New Year.

A large area of paddy fields in Chau Thanh A and Vi Thuy Districts, Hau Giang Province close to harvest time has been inundated, forcing their owners to spend a large amount of money pumping the water out of their farms.

Ngan’s rice crops were expected to be ripe in about 10 days, he said, adding that the rain has damaged a large portion.

Trinh Tan Si, another farmer in Vi Thuy, complained that abnormal rains in January and February have reduced the output from the usual 1.2 metric tons to some 800 kilograms per 1,000 square meters.

According to Nguyen Van Tranh, deputy director of the Department of Agriculture and Rural Development in Ca Mau Province, nearly 3,400 hectares of paddy during harvest time has been destroyed by the rains.

Green bean growers in the locality have also suffered heavy losses as the young trees were extremely vulnerable to water.

Hundreds of hectares of green bean farms have been ravaged by the wet weather, with local authorities urging farmers to cease planting the crop to avoid further losses, Trand said.

Milk fruit planters in Tien Giang Province have also been put in a difficult situation due to the unseasonal downpour.

“The rain has not only caused the fruits to be rotten but also made their harvest much harder,” a farmer stated, adding that several branches have been felled by the rain.