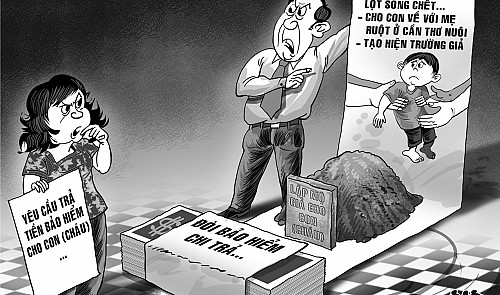 A Hanoi woman who attempted to cheat an insurer out of compensation at the expense of her own hand and foot has been exempted from charges related to her fraudulence, police said Wednesday.

The criminal investigation was dropped after L.T.N. eventually failed to claim a VND3.5 billion (US$133,929) compensation package, after losing a hand and foot in what investigators have identified as a staged train accident, according to Bac Tu Liem District police.

With the plan unaccomplished and the insurer having yet to lose any money to the 30-year-old Hanoian, there are not enough grounds for criminal charges, the officers added.

In May, N. hired a 21-year-old man named Doan Van D. to chop off her left hand and left foot.

D. was offered VND50 million ($2,232) for the contract, which also required him to report witnessing the woman losing those limbs in a train accident at dawn on May 5.

N. was hospitalized and told by doctors that it was impossible to reattach her lost limbs. She later told police that she had been walking along the railway in despair due to family issues when she was struck by the train.

Police grew suspicious of her account and opened an investigation to verify the case. After three months, police officers determined that D. and N. were acquaintances and there was no incident involving a train.

D. was paid an initial sum of VND20 million ($893) before the scam was unearthed.

If they had succeeded, the fraud would have earned N. VND3.5 billion in compensation from an insurance policy she had purchased.

Phung Dac Loc, general secretary of the Association of Vietnamese Insurers, said destroying one’s own body to the point of disability in an effort to cheat an insurer is unprecedented.

Bac Tu Liem police said, citing information provided by N.’s family, that the woman has a criminal record and is in massive debt.

N. also confessed her debts to police, saying she owes hundreds of millions of dong and pressure to settle her debts led her into the scam. (VND100 million = $4,464)

“The greatest shame is that N., instead of claiming the money, suffered a huge loss by losing both her hand and foot,” Tung, the Bac Tu Liem police chief, said.

Loc, from the Association of Vietnamese Insurers, also said that it is not easy to fool insurers.

“Whenever we receive a compensation file, we carry out intensive checks with different agencies, even among our internal units, to clarify the claim,” he said. “It is easy to detect conflicting points in cases we suspect are fraudulent.”

Loc also recalled some of other failed insurance attempts.

A woman in the southern province of Kien Giang attempted to claim compensation for an adopted son who she said had drowned.

“She even managed to obtain a fake record of the drowning case from local police, but the insurance company eventually found that it was all staged,” Loc said.

“The woman had registered to change the name of her foster son, and returned him to his biological mother.”

In another extreme plot, a husband reported that his wife had died in a traffic accident to claim her compensation.

However, it turned out that the wife simply moved to live in another locality.

“He even built a tomb for her that contained nothing more than soil mixed with pig blood,” Loc recounted.