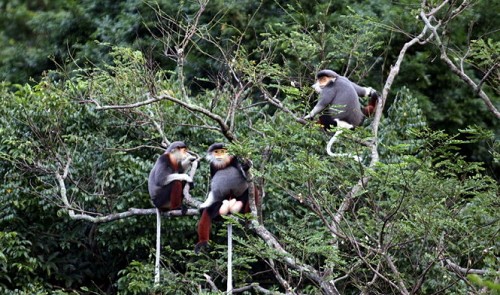 The Party Committee of the central city of Da Nang has decided to use the endangered red-shanked douc langur as the symbol for the 2017 Asia-Pacific Economic Cooperation (APEC) forum it is hosting next year.

The choice is indicative of the municipal administration’s efforts in building an environmentally-friendly city.

The species, populated largely in Son Tra Peninsula, is dubbed ‘the queen of primates’ for its iconic beauty.

According to the International Union for Conservation of Nature (IUCN), the species can also be found in Laos and Cambodia.

It is listed in Vietnam’s Red Book and is on the IUCN Red List of Threatened Species.

The forum is aimed at creating greater prosperity for the peoples of the region by promoting balanced, inclusive, sustainable, innovative and secure growth as well as accelerating regional economic integration.

Vietnam joined the forum in 1998 and successfully chaired APEC 2006 and the sixth APEC Human Resources Development Ministerial Meeting in September 2014, both in Hanoi.

The 2017 APEC meeting is scheduled to be convened in Da Nang.