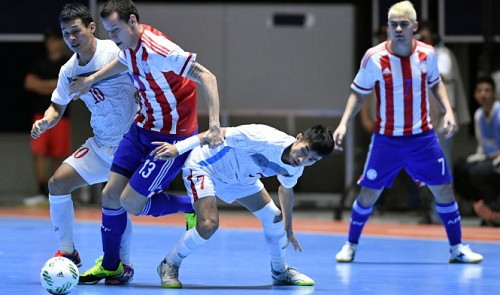 Elevated spirits fell flat as Vietnam failed to secure its second tournament victory on Thursday against No. 4 ranked Paraguay at the 2016 FIFA Futsal World Cup in Colombia.

The Vietnamese team were confident going into the match, hoping to continue their momentum from Monday’s 4-2 triumph over Guatemala, but wound up conceding to Paraguay in a 1-7 loss.

The Paraguayans took the lead in the third minute and their goalie, Gimenez, left the Vietnamese without an opportunity to convert, leading to Paraguay walking away from the first half ahead 5-0, with an own goal by Long Vu in the 13th minute.

Vietnam conceded two more goals in the second half, before Tran Van Vu netted a shot in the Paraguayan goal just seconds before the game ended.

After two games, Paraguay took second place in Group C from Vietnam, while Italy cemented their hold on the top post with six points. Guatemala finished last in Group C with back-to-back losses.

Vietnam now seek to advance from the group stage as one of the four best third-place teams, an achievement that may prove tough following their Paraguay defeat.

A Vietnamese win against group leaders Italy in the final group stage game this Saturday is a must for advancement.

Winning the first-ever ticket to the FIFA Futsal World Cup is a historic achievement for the young Vietnamese futsal team, which rank 42nd worldwide.

A total of 24 teams qualified for the tournament in Colombia.

They compete in six groups of four from September 10 to October 1.