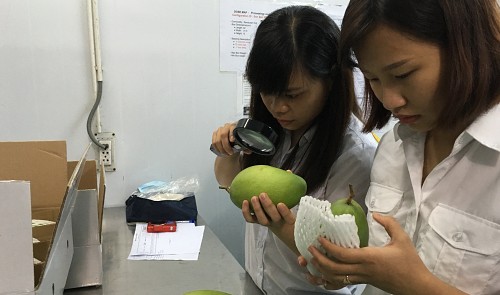 Vietnam’s fruits and vegetables are slowly taking over other export products as the momentum for the country’s agricultural and rural development, customs statistics showed.

The first Vietnamese shipment of fresh mangoes to Australia was delivered last week, while the country’s dragon fruits are expected to follow suit as soon as early next year.

Huynh Le Quang Nhat, representative of Hanoi-based exporter Agricare Vietnam Ltd. Co., said his company is in a hurry to prepare fresh mangoes for the second shipment to Australia next week, after the first tonnage of the fruits was embraced by Australian customers.

“Dragon fruit exports to the U.S. market have been favorably welcomed by both Asian and native-born Americans. Many schools there have included dragon fruits in their meals for students,” Hugo CEO Vuong Dinh Khoat said.

According to Dr. Nguyen Huu Dat from the Vietnam Fruits and Vegetables Association, fruits and vegetables have become the new staples of Vietnam’s agricultural export industry, with a fast growth rate and much room for future development.

Meanwhile, the country’s traditional export products such as rice, cashew, pepper, and coffee are not likely to make any significant growth, Dat said.

As Vietnamese fruit and vegetable exports to ‘picky’ markets such as Australia, Japan, or the U.S. are still limited, China retains its role as Vietnam’s single largest fruit and vegetable importer, consuming 50 to 60 percent of the country’s shipments.

“As China imports [fruits and vegetables] of any quality, Vietnamese farmers may one day lower their product quality,” CEO Khoat said.

In response, many Vietnamese exporters are taking up the role of manufacturers by investing in farmlands and technology to grow and process their own fruits and vegetables for export.

Much as Vietnam’s fruit and vegetable export industry has grown, the total area of farmland for fruits and vegetables in the country remains at less than two million hectares.

Vietnam earned US$1.68 billion from exports of fruits and vegetables from the beginning of 2016 until September 15, with the first half of the month alone generating over $100 million, according to figures provided by customs officers.

With these numbers, fruits and vegetables have surpassed rice, pepper, rubber, and crude oil to take the fourth place on the list of Vietnam’s most valuable agricultural export products, behind seafood, coffee, and cashew.