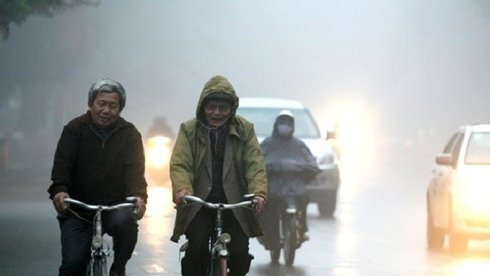 An enhanced cold front has reached the northern part of Vietnam and is forecast to bring temperatures as low as six degrees Celsius to the region.

A cold spell entered the northern border of Vietnam on Tuesday evening and is anticipated to extend its effects on northern, north-central, and central provinces, the National Center for Hydro- meteorological Forecasting has said.

Temperatures in the affected regions from November 29 to December 4 are expected to average between 12 and 15 degree Celsius.

Hanoi will become frigid at night and during the early morning as temperatures range from 13 to 15 degree Celsius.

Under the influence of the cold front, medium to heavy rainfall will hit the areas from the central city of Da Nang to the south-central province of Khanh Hoa.

Quang Nam and Phu Yen can anticipate the heaviest rainfall, between 200 and 400 millimeters, posing a risk of flood and landslide.

Rain will then shift toward the north-central part of the country, affecting provinces from Nghe An to Thua Thien- Hue.

The cold spell is also forecast to cause rough seas near the Gulf of Tonkin with winds at 49km per hour and squalls of up to 74km an hour.

The northern part of the East Vietnam Sea, including the Hoang Sa (Paracel) Archipelago, will experience seas between 1.5 and three meters high caused by winds of 39 to 61km per hour.