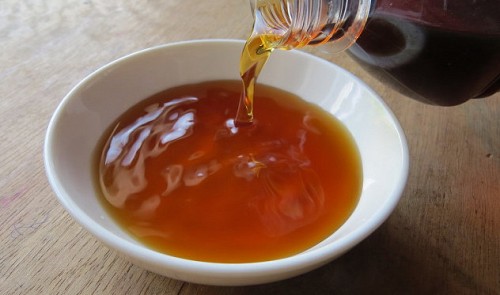 A set of criteria defining Vietnam’s iconic ‘nuoc mam,’ or fish sauce, has been issued by the country’s seafood and fish sauce association.

The standard includes criteria for raw materials, quality, testing methods, labeling and transportation, all aimed at setting a bar for the quality of traditionally made fish sauce in Vietnam.

Traditional fish sauce is made by putting interwoven layers of fish and sea salt inside an anaerobic container and leaving the mix to ferment for up to twelve months, resulting in an amber-color liquid high in protein, salty in flavor, and strong on the nose.

However, many producers in Vietnam have come up with a more affordable and arguably tastier ‘fish sauce’ that gets its smell and taste from flavorings and chemicals, without the use of any real fish or the need for fermentation.

Though the chemicals and flavorings involved are safe, such products have been bashed by traditional fish sauce producers, who said their use of the term ‘fish sauce’ was misleading as they contained no actual fish.

The Vietnam Association of Seafood Exporters and Producers (VASEP) along with several local fish sauce associations published the country’s first-ever standard for fish sauce on Sunday, which looks to separate ‘traditional fish sauce’ from other chemically-made fish sauce-flavored condiments.

According to Vu The Thanh, a member of the standard’s drafting team, the criteria are only applied on fish sauce made from the natural fermentation of fish and sea salt over a period of at least nine months.

Fish-based condiments that have been diluted or had colorings, flavorings, preservatives or other additives included will not fall into the scope of the standard and will not be able to have the words ‘traditional fish sauce’ on their labels," Thanh said.

Qualified products are then classified into three groups based on their nitrogen content, Thanh added.

Vietnam’s fish sauce market is valued at about US$501 million, with over 70,000 metric tons of the condiment produced in 2015.

The country consumes over 300 million liters of fish sauce a year on average, which translates into nearly four liters per person.