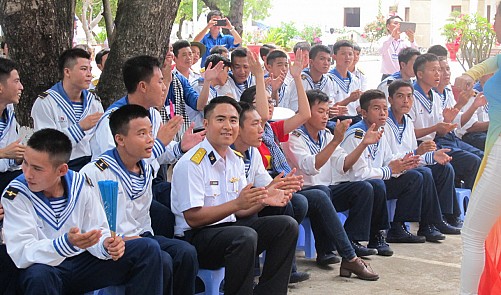 An initiative by a volunteer student from Hanoi six years ago now provides soldiers and civilians in Vietnam’s Truong Sa (Spratly) archipelago with a sustainable source of greens.

In 2011, Naval Sub-Lieutenant Tran Quoc Hiep, at the time still a junior at the Military Academy of Logistics in the Vietnamese capital, first set foot in the East Vietnam Sea archipelago with plans to help islanders grow vegetables in harsh conditions.

“I grew up in Me Linh District just north of the Thang Long Bridge, where my family grew rice, vegetables and flowers to sell in the capital’s downtown,” Hiep said. “I signed up for the Military Academy of Logistics partially because I wanted to use my farming experience to help soldiers who perform their duty in unfavorable conditions.”

“When I heard about a program by the Central Committee of the [Ho Chi Minh Communist Youth] Union that was looking for youths to visit Truong Sa, I just couldn’t resist,” Hiep recalled.

The program’s goal was to seek Vietnamese youths with ideas to help improve the lives of people on the islands.

Joining Hiep on the journey to Truong Sa was then-Deputy Minister of Agriculture and Rural Development Bui Ba Bong and Dr. Ngo Quang Vinh from the Institute of Agricultural Science for Southern Vietnam, both of whom showed interest in Hiep’s plan to transform vegetable farming on the islands.

One year later, Hiep graduated with distinction and asked to join the Vietnam People's Navy so that he might pursue his dream of returning to Truong Sa.

In 2015, that dream became a reality when the now-naval sub-lieutenant was stationed on Sinh Ton (Sin Cowe) Island, one of many islands in the Truong Sa archipelago.

Hiep was mobilized to Son Ca (Sand Cay) Island in the same archipelago at the end of 2016 where he is still stationed.

According to Hiep, farming for vegetables on the island is a luxury, as every centimeter of cultivatable soil is precious.

“Ten square meters in the mainland may not seem like much, but on these islands even having one square meter of soil for farming is a blessing,” he explained.

“I was fortunate to be stationed on the island when the greenhouse farming project by Dr. Ngo Quang Vinh was already being piloted,” Hiep said. “We worked together on the project. When we first started it was still incomplete, but now both of these islands can provide vegetables for themselves and have no need for outside aid.”

Hiep said on each of the islands he would learn from the farming experience of soldiers and couple it with his own knowledge to introduce effective farming techniques for each particular situation.

The vegetables are watered daily using urine and recycled water to prevent the greens from the negative effects of salinization from seawater.

In April, two 100 square meter greenhouses were put into operation on Son Ca Island with the help of experts from the Institute of Agricultural Science for Southern Vietnam.

The greenhouses not only provide a more sustainable farming method for locals on the islands but also help collect precious rainwater to be used for daily activities, according to Phan Duc Duy Nha, a research scientist at the institute.