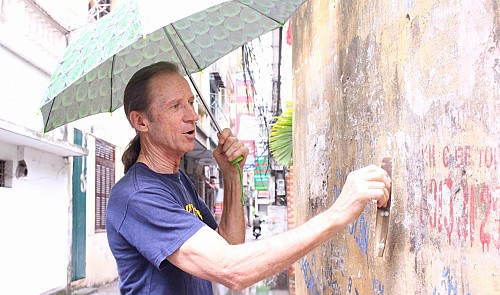 A veteran of the American war in Vietnam now spends his days cleaning the walls of Hanoi and teaching English to Vietnamese students.

His mission to rid Hanoi of advertisements posted illegally on public walls has inspired local youths and hundreds of his students to do the same.

Over the past month, residents of Nguyen Ngoc Vu Street in Hanoi’s Cau Giay District have spotted a strange ‘Westerner’ diligently removing posters from local walls, regardless of the weather.

The man’s name is Paul George Harding, a 69-year-old American who has found purpose in his new home, in a country he once fought against.

His mission is simple: if every Hanoian spend some time to remove a single poster every day, the city’s walls would be beautiful in no time.

An apology through action

Paul first came to Vietnam in 1969 as a soldier during the American war in Vietnam, where he served for four years.

After returning home having experienced the full brutality of war, Paul became an anti-war activist, working to end it.

What led to his decision to return to the country in 2014 was the book, Last night I dreamed of peace, a story based on the diary kept by 27-year-old Vietnamese army doctor Dang Thuy Tram.

The diary was Tram’s personal account and reflection on the cruelty and ruthlessness of the war, which she kept in detail until her death while trying to defend her patients.

Paul said coming to Vietnam was his way of apologizing for the suffering his country had caused to the Vietnamese people.

Upon seeing the walls of the Vietnamese capital littered with posters and flyers, Paul decided that he had to act.

The American has so far invested VND10 million (US$441) in tools and paints to re-paint the walls after ridding them off the intruding posters.

Paul’s work has inspired over 440 students who take his English classes to pick up the same course of action.

Paul said he was particularly impressed by one female student who persisted with the poster removal until 3:30 am, despite having to work in the morning.

The Vietnam veteran regards the work a battle to raise Hanoi resident’s awareness of how such posters litter the city.

Shoulder and wrist pains, as well as the odd cut and bruise are the most common injuries of his day-to-day, given that significant force is required to completely remove the posters, and ladders are needed to reach high spots.

The job is at times discouraging he admits, especially when a wall is filled with posters having been cleaned only a day earlier.

Refusal to give up

Despite the constant advice that what he and his students were doing was pointless given the immense number of postered walls in the city, Paul said he had no plans to give up any time soon.

From the initial five or six volunteers who joined him on his early missions, he said, his team had now expanded to over 440 regular people and inspired several others to take action.

Paul said he believed they were on the right track to make Hanoians realize how beautiful their streets could be without the ugly posters.

He hoped to ultimately attract the attention of local authorities and get them to step in for the common benefit of all Hanoi residents.

Do you want to learn English?

Aside from cleaning walls, for the past three years Paul has been running English classes to help improve the communication skills of Vietnamese.

The idea for his class came to Paul after he did some research and discovered that the cost of learning English in Vietnam was remarkably high compared to average local incomes.

Despite no prior experience or qualifications in education, Paul said he was confident of his teaching ability thanks to his parents being both teachers.

At first, Paul’s English classes were offered for free to those in need with the local administration providing him with a venue.

However, as the classes expanded, the small room he was given was no longer large enough to host all his students, forcing him to associate with a local English center and rent a venue.

Paul now charges his students a symbolic tuition fee of VND150,000 ($6.61) per month to cover that rent and other operational costs.

Nevertheless, Paul said his students had been incredibly supportive and more than willing to pay the fee.

The one thing Paul said he was impressed about Vietnamese students were their diligence and perseverance, which helped them achieve their desired goals.

Less than four months away from his 70th birthday, Paul said he could not believe he was already so old, as on the inside he still felt like a 30-year-old.

The secret to his eternal feeling of youth? A body full of energy and a mind full of hope, he said.