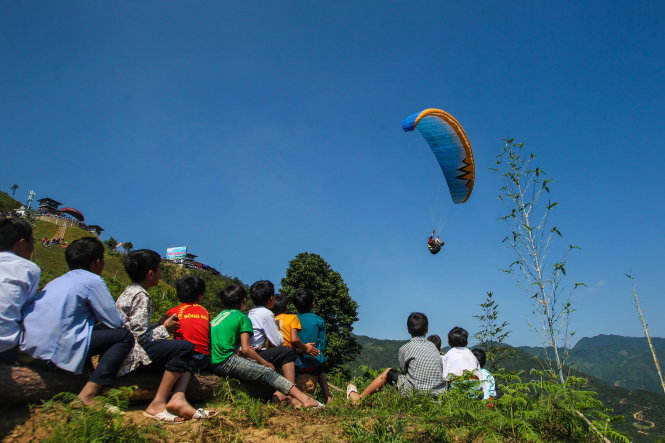 ​Paragliding a new drawcard at one of Vietnam’s greatest passes

Khau Pha Pass, deemed one of Vietnam’s four most spectacular passes, is now not only about breathtaking scenery but also the chance to take an exhilarating ride on a paraglider.

Khanh, his companions and paragliding pilots traveled almost five hours from Hanoi, traversing treacherous mountain passes and slopes before they could reach the high-profile pass in the wee hours, as it dropped to around 15 degrees Celsius.

The natural wonder appears at a height of approximately 1,500 meters and is dotted with cottages nestled under lush foliage.

At 6:00 the following morning, the members gathered at the jump site.

The team was divided into two squads performing individual and tandem flights.

The individual paragliders are seasoned pilots, while tourists or extreme sports fanatics can enjoy the same experience accompanied by qualified trainers or pilots.

The tourists and pilots performed seamlessly in tandem and were connected by fail-safe gear.

All visitors needed to do was perform simple maneuvers during take-off and landing and comply with the pilots’ commands.

The distance from the starting point to the landing point was around 3km, with the flight length varying based on visitor demand and weather conditions.

The take-off is typically the most nervous moment, during which the pilots and tourists had to run in perfect tandem before they could spring from the ground.

Participants were overwhelmed at the sheer grandeur of the alpine landscape once their glides were fluttering in the wind.

Sunshine cast a mirrored image of themselves on the fields, during the season in which rapids tumble down, adding to the stunning view.

The flight also helped Khanh realize his dream of soaring above the fields after visiting the picturesque valley three years ago.

It gave him striking vistas which changed noticeably as he moved.

He was most impressed with the moment his accompanying pilot lifted them into the air via a column of hot air emitted from the ground.

Khanh said his whole body then cringed with anxiety after the sudden change of height.

A few seconds later, he regained composure and took in the incredible views.

What he did regret was his inability to snap shots while his hands held firmly to the safety straps.

Paragliding is not without its risks.

Lan, another team member who has practiced the extreme sport for nearly two years, was hurled far away from the jumping ground and plunged into an abyss because of her failure to check the brake straps properly during her first attempt.

The glide straps which tangled in a nearby bush spared her from serious injury.

After an hour of rest, Lan made her second attempt to the pilots’ and tourists’ surprise.

“It’s the first time I have suffered such a serious incident. But I’ve come to terms with the risks and drawn from the experience for my next flights,” she shared.

“Paragliding gives us perfect peace. We are free of all worries and become one with nature while we’re in the sky,” she added.

Pham Quang Tuan, who conducted pilot paragliding flights in Mu Cang Chai District and was the former chair of the Hanoi Vietwings Paragliding Club, said that he and a few friends were in awe of the magnificent landscape during their trips in 2012.

They managed to obtain flight permits in the area in 2013 and had received positive feedback from local authorities.

In 2014, the administration in Mu Cang Chai District conducted upgrades to the take-off and landing ground and built a structure for holidaymakers to behold the terraced fields of Cao Pha Valley.

A festival dedicated to the aerial sport has since been held on an annual basis and has drawn a large number of adventure sports buffs.

According to pilots, maiden flyers and tourists with minor ailments should not look straight down and limit flights to 15 or 20 minutes, as longer flights may lead to dizziness and nausea.

They are also advised against somersaults or free falls.

A number of tourists who performed repeated spins did vomit while in the air.

An alternative is taking National Highway 32 in the direction of Son Tay Town, Hanoi, which is, however, quite an ordeal due to heavy traffic and small streets.