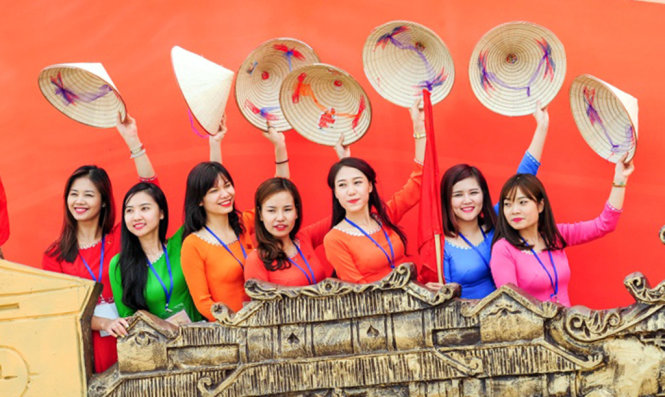 In praise of Vietnamese women

Modern Vietnamese girls taking selfies and old grandmas trudging to the market with fruit baskets and chickens wearing a weather beaten ‘non la’ (conical hat) – the typical image when I think of women in Vietnam!

The clash of past and present, the old ladies planting rice in pajama outfits and young high school girls chattily pedaling away in spotless traditional ‘ao dai’ compared with office girls in tight black skirts whizzing across town on brand new motorbikes and intrepid university lasses with laptops in coffee shops are part of what makes this country so hard to pin down. There’s no single defining image of the nation or its women.

Vietnam celebrates the qualities and value of its female population twice a year – International Women’s Day on March 8 and National Women’s Day on October 20. Generally, in March, it’s a fun time with flowers, chocolates, eating out for dinner and families hosting meals for the generations of women in the family while the national day reflects the achievements and progress of our better half.

Both days acknowledge the contributions of women to the freedom of the country. Women fought besides men during the wars that plagued Vietnam for most of the last century and indeed, historically. Hai Ba Trung is a street name you’ll see in almost every urban district and refers to the two sisters Trung Trac and Trung Nhi who fought for independence against the Han Dynasty. Nguyen Thi Dinh was Vietnam’s first female general during the American war. Thousands of women supplied the army, stumbling through the jungle trails carrying arms, food and equipment across the country.

October also acknowledges women’s contributions in education, health, science and other areas. Yet, progress in Vietnamese women’s lives is uneven. Unusual to Western eyes are the countless women laboring under back-breaking conditions in the countryside, or at constructions sites although the endless lines of factory production or assembly line girls are common enough. More than 70% of the agricultural workforce is women; however, even the transition from farm worker to industrial worker and the rise in salary are a marked improvement.

Even though Vietnam has passed laws for equality, particularly with women in mind there’s a long way to go. Fortunately, “The 2006 Law on Gender Equality highlights the quality of women's rights in Vietnam. The Social Insurance Law (2006), Law on Residence (2006), the Law on Domestic Violence Prevention (2007), and the Nationality Act (2008) also contain provisions to protect the rights of women.”

Although Vietnamese women contribute massively to the national economy, run many small-scale non-state businesses and occupy more than half of the office and service industry jobs in the country, their representation in the government runs at around 20-25%. Running the country may actually produce more changes than holding the reins as these women control more of the changes in technology, money, administration and social welfare.

Modernity, lifestyles and education are changing women fast in this country; what is mostly holding women back are family beliefs; stay at home, produce a son as a sign of respect (really!) and do what the family wants regardless of personal ambitions.

Here’s an example: I know two women in Hoi An – the first is a well-educated, young married woman whose husband runs his business and she starts businesses often in conjunction with other women in the town. Each owns their businesses in their own name and shows common support and interest in others’ work as well as sharing household chores.

The other woman, a country girl, runs a café and the husband helps out occasionally, most sitting with his clients. He forbids his wife from having male friends or pursuing an education while she looks after the kids, the café, and the money and just about everything else. He shows no interest in her wants or needs. She owns nothing and often dreams of running away to start a new life. One day soon, I believe, she’ll get her wish.

Social change is slowly becoming greater – more women staying longer in the workforce, delaying childbirth for financial independence, a growing unwillingness to marry simply because it’s expected of her and the realization that there’s life beyond being a man’s servant. What sometimes shocks me is the forcefulness with which some young women vow never to marry a Vietnamese man. Yep, the times are changing.

They are breaking out of the traditional mold of Vietnamese life. And with that, they may create an even more interesting Vietnam…

Perhaps this is the achievement to celebrate this national women’s day.

Though three Vietnamese websites were recently reprimanded and requested to remove all the copies of the films which were accused by the Motion Picture Association of America (MPAA) of violating their copyright, the film copyright war in the country is far from over