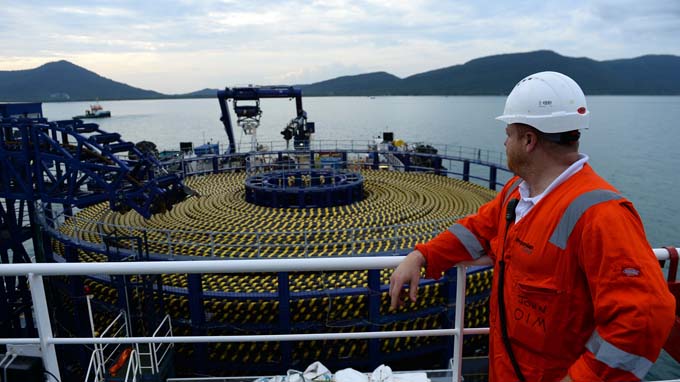 The project to set up an undersea cable to transmit power from the inland Ha Tien Town to Phu Quoc Island of the Mekong Delta province of Kien Giang broke ground on Sunday.

The 55.8-km submarine 110KV cable system is carried out under an engineering, procurement, and construction contract signed between Electricity of Vietnam Corporation's Southern Power Corp (EVN SPC) and Prysmian Powerlink in May 2012.

It will provide a sustainable power supply for the island where most locals still rely on diesel generators to light up their homes and power their TV sets.

Total investment for the project is estimated at VND2.36 trillion (US$111.32 million), making it the largest of its kind in Southeast Asia.

It is funded by a loan from the World Bank and supplemented with EVN SPC's own budget.

Speaking at the groundbreaking ceremony, Minister of Industry and Trade Vu Huy Hoang said the project will become operational during the Lunar New Year festival, which falls in late January 2014.

Then, locals will have a sustainable power supply at equal prices to those on the mainland, he said.

In Ganh Dau Commune, for instance, the price is VND25,000 per kWh, 16 times higher than what people on the mainland pay.