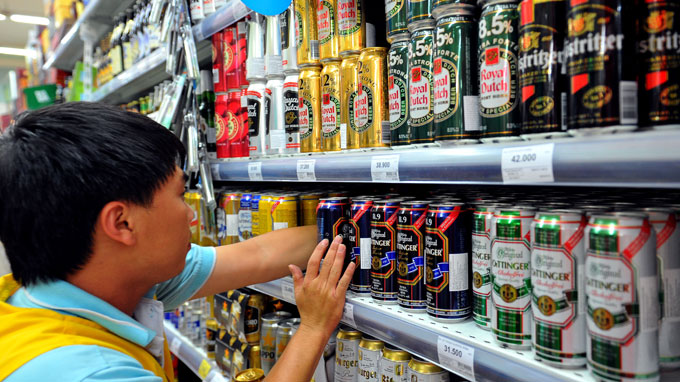 The price of imported beer from Belgium, Germany, Holland, England, and France, 3 – 4 times higher than local beer, is losing market shares as customers tend to buy cheaper products in the face of economic slowdown.

This year, imported beers including St. Sebastian Grand Cru, Duvel, and Chimay from Belgium, Oettinger and Royal Dutch from Germany, Singha from Thailand, and Corona from Mexico, can be found in any supermarket in Ho Chi Minh City’s District 1 and 3.

Most of these foreign products cost 3 – 4 times higher than local beers, despite being the same size. For instance, Chimay beer may cost around VND95,000 to VND280,000 per bottle, depending on the type and size.

England and Belgium products are sold at about VND250,000 to VND255,000 per bottle with a capacity of 250 milliliters. German beers sold in District 3’s Nguyen Thong Street such as DAB, Bitburger, and Germania seem to be cheaper as their price varies from VND22,500 to VND31,500 per bottle.

Le Xuan Huy, a large beer dealer in HCMC’s Tan Binh District said that due to the expensive price, most foreign beers imported to HCMC are sold in supermarkets and stores in the city center rather than small beverage shops.

Vietnamese people’s choice of beer depends on individual preference and varies by region. “333,” “Saigon Green,” and “Saigon Red,” which account for 40 percent of the total output of 2.9 to 3 billion liters of beer consumed yearly in Vietnam, are most popular in the central region.

But Sebeco will target the premium segment soon, said Tuat, adding that the company is preparing its strategy to reveal a new product to compete with imported beers. “It will not only have a competitive price but also be of better quality,” Tuat asserted.

He expects that the entrance of Sabeco’s “Saigon Gold” early next year will make the market more competitive.

H.T., who works for a foreign company which mainly collects research data and surveys the FMCG group, said Vietnamese are “always open to tasting new products when invited to do so but only buy popular brands.”

This is also the reason why Foster’s, Zorok, and even Sapporo, which were mainly given as gifts in previous years, are not attractive anymore, as not all foreign products could successfully enter the Vietnamese market.