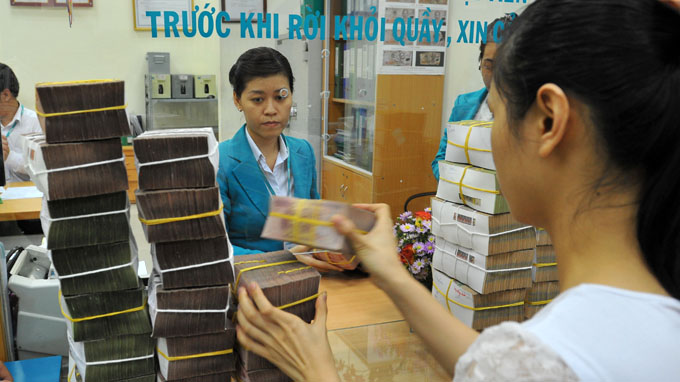 The non performing loan (NPL) ratio in the local banking system is not as high as the 15 percent rate recently reported by US-based credit rating agency Moody’s, said the State Bank of Vietnam (SBV) on Saturday.

The agency said in the report that it estimated the real bad debt ratio in the Vietnamese banking system to be at least 15% of total outstanding loans, much higher than the 4.7% rate the central bank recorded as of October 2013.

The data compiled by other international credit rating agencies also assessed that NPLs in the Vietnamese baking system should be much higher than the official figures the SBV announced, including Fitch, which also estimated the rate to be 15%, according to the report.

However, according to data reported by local credit institutions, the NPL ratio of the banking system of Vietnam increased from 4.08% by the end of 2012 to 4.73% of total outstanding loans as of October 2013, said SBV.

“As the macroeconomic situation gradually improved, coupled with the efforts of the local banking system, there have been many positive signs contributing to the tackling of the bad debts.”

“By the end of December 2013, the NPL ratio of the whole system has significantly been reduced to 3.63% of total outstanding loans. This is the central bank’s official bad debt figure which is determined based on the provisions of the current legislation and official information,” said the central bank in the press release.

“To get these results, the Vietnam's banking system has proactively implemented many solutions to curb rising bad debts, such as restructuring debts to support businesses in accessing new loans for production, forcing banks to speed up debt recovery and set aside loan-loss provisions, and implementing many measures to improve credit quality and limited new bad debts incurred.”

“The establishment and operation of the national asset management company, Vietnam Asset Management Co, is a notable move [of the Vietnam’s government and SBV in facilitating the tackling of NPLs].”

“In addition, debt restructuring measures under Decision 780/QD-NHNN has really been proved to be very meaningful for businesses as they can continue to access bank loans with reasonable interest rates. But it also poses potential risks of rising bad debts if the macroeconomic situation, business conditions, and the real estate market recover slowly than expected.”

“If we calculate carefully, including bad debt bad debt restructured under Decision 780/QD-NHNN, the NPL ratio is only about 9% [at maximum],” said SBV.

As the standardized scales in calculating and classifying NPLs vary from one agency to another, it is normal to have different figures on NPLs in Vietnamese banks.”

“But the data and information on bad debts and banking activities complied and reported by a state agency responsible for managing it, the central bank, is more trustworthy and have more legal basis. Thus, the market information, research, assessment of other credit agencies and organizations can only be treated as reference,” said SBV.