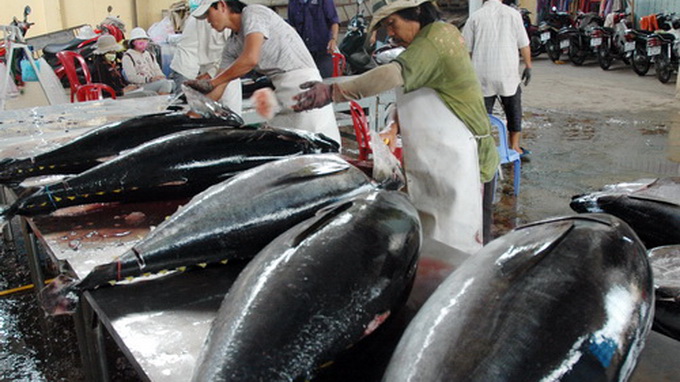 The first batch of tuna caught by fishermen in central Vietnam’s Binh Dinh Province, using Japanese technology, has been sent to Japan so that it can arrive at a local market in the East Asian country on time for an auction.

The tuna, weighing 448 kilograms, were caught by the fishermen on Wednesday moning. They were transported to Ho Chi Minh City and shipped to Japan from Tan Son Nhat International Arport later the same day.

An auction to buy the tuna fish is slated to take place on Friday in Osaka.

The shipment of the tunas, all of which were landed using new fishing and storaging techonlologies transferred from Japanese experts, marks the beginning of cooperation between Binh Dinh and Japan to improve the value of the local tuna-fishing sector.

The catch is fresher and of higher quality in comparison with previous batches, said Masakazu Shoga, a Japanese expert working for Kato Hitoshi General Office (Kato Office), the importer.

The deal also makes Kato Office a Bidifisco representative in Japan, which will put Binh Dinh tuna on sale at the auction centers and seafood store chains of Kato Office’s partners in the East Asian country.

Before that, Bidifisco had signed agreements with the owners of five Vietnamese fishing vessels on a pilot project to apply Japanese technology in fishing and storing tuna for export to Japan.

Accordingly, after local fishermen sell their products to Bidifisco, all of them will be shipped to Japan through Kato Office against Japanese standards.

There is still room for improvement if Binh Dinh fishermen want to win the heart of the majority of Japanese consumers who have a habit of eating a lot of seafood, Shoga said.

Vietnamese fishermen need more practice to master the catching and preserving technology, he said, adding that he is ready to offer step-by-step instructions to lower the rate of tuna failing to reach Japanese benchmarks.

"I hope one day 100 percent of the tuna fish caught by Vietnamese fishermen will be accepted in Japan," Shoga added.

In early June, the Binh Dinh government organized a ceremony to receive the tuna hunting technology and fishing equipment it had bought from Japan at VND1.5 billion (US$70,755) in a bid to improve the quality of its catches.

Currently the Philippines and Indonesia are exporting tuna to Japan at 1,000 yen ($10) per kg, while Vietnam can make only half that price.

By the end of last month, the first fishing boat made of composite materials and designed to hunt for ocean tuna, was launched at a shipyard in the coastal city of Nha Trang in central Khanh Hoa Province.

The VND6 billion ($282,406) vessel, the first of about 200 of its kind built under a project sponsored by Japan-based Yanmar Co, aims at sustainably developing the ocean tuna fishing industry in Vietnam and increasing the income of local fishermen.

The 350-horsepower VIJAS Research & Training Vessel is equipped with Japanese fishing tools and tuna catching and preserving technologies, Yukio Kikuchi, the director of Yanmar’s Vietnamese project, said during the launching ceremony at the Institute for Ship Research and Development in Nha Trang.

The composite boat will undergo a technology upgrade to be able to make its first offshore journey to hunt for tuna in September, the Japanese director said.

The company has targeted to export some 4,500 tons of tuna caught off Vietnam’s coast to Japan every year starting in 2015. Yanmar will also support fishermen by buying their tuna and exporting them to Japan.