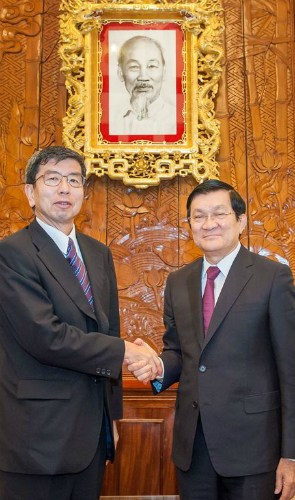 Vietnam’s gross domestic product is forecast to grow at around 5.6 percent in 2014, Takehiko Nakao, President of the Asian Development Bank (ADB), said at a press conference last week during his working trip to Vietnam to attend the fifth Asia Development Forum.

The country’s GDP is expected to continue growing below its potential, at less than six percent, in 2015, Nakao said at the conference in Hanoi on Friday.

This forecast may change due to many different reasons but the ADB has found a tendency of strong and rapid growth, he said.

What really matters is the quality of growth rather than growth targets, the ADB president said.

But the Manila-based bank encourages the Vietnamese government to aim at a 7-8 percent expansion in the coming years to meet the potential growth rate of the country, he added.

Vietnam has been among the fastest-growing economies in the world since 1990 and it reached middle-income status in 2010. Economic growth, however, has tailed off – from an average rate of 7.3 percent during 2000-2007 to 5.7 percent during 2008-2013 – due to slow-moving structural reforms and global uncertainty.

Reform should be accelerated

During the press conference, Nakao said that he is impressed with Vietnam’s achievements in socio-economic development in recent years, particularly the government's efforts to curb inflation, reform state enterprises, and stabilize the macro-economy.

To solidify the gains made and restore high and inclusive economic growth, structural reforms – primarily for state-owned enterprises (SOEs) and the banking sector – need to be sped up, the president said, adding that the government also needs to manage public debt by broadening the tax base and rationalizing public expenditures.

Nakao pointed out that the private sector plays an important role in boosting Vietnam’s competitiveness and helping the country avoid the middle-income trap, which means getting stuck in middle-income status.

The Southeast Asian country should also derive maximum benefits from global economic integration through increased trade and investment coming from active engagement with the EU-style ASEAN Economic Community, to be formed next year, and various free trade agreements, he said.

The government must effectively implement business laws and regulations to create a level playing field for all enterprises and to optimize the competitive business environment, Nakao said.

The ADB leader also lauded the effort by the Vietnamese government in reforming SOEs though there are still quite many state-owned firms in Vietnam now.

“If SOEs continue to operate the current way, it is difficult for them to be as effective as they should be,” he said.

The only way to make them more efficient is through privatization and equitization, he added.

The ADB has committed US$630 million over 10 years from 2009 to the pilot restructuring of selected large SOEs, which is aimed at supporting the ongoing reforms to improve their competitiveness.

The bank is also providing support for tackling the longer-term challenge of developing a more diversified financial sector in Vietnam.

These reforms will also facilitate the development of the local private sector, most importantly small and medium-sized enterprises.

Vietnam is one of the founding members of the ADB in 1966. Since resuming operations in Vietnam in 1993 to December 2013, the ADB supplied assistance amounting to $12.85 billion, including $12.43 billion in loans, $253.5 million in technical support, and $170 million in grants to the Southeast Asian country.

The ADB’s annual lending program for Vietnam is about $1.3 billion and covers assistance in transport, energy, agriculture and natural resources, water supply and other municipal infrastructure and services, education, and finance.