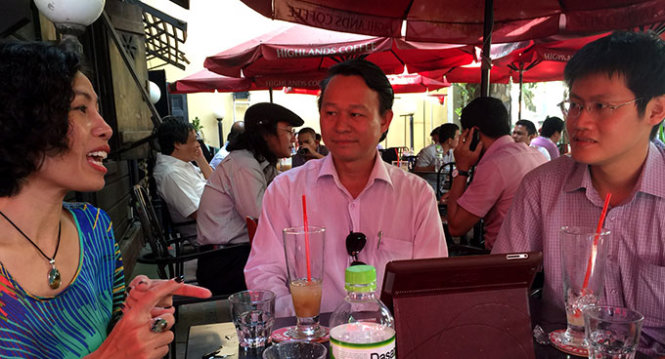 A successful businesswoman has run a network gathering entrepreneurs in various fields who offer their young, inexperienced counterparts unconditional orientation and mentoring.

Like some other similar networks, SME - Networking & Mentoring- a nonprofit local organization founded in 2011- works to connect young local businesspeople, and offer them mentoring, orientation and assistance. The “mentors,” who are entrepreneurs, managers and experts in various areas, each spend one or two hours each week to share their expertise, experience and tips with their young colleagues who run startup businesses in the “one helps one” model.

They also hold seminars and events on a regular basis to mentor many more.

In 2007, the organization’s founder, Pham Thi My Le, was the only Vietnamese businesswoman to be selected by the U.S. Department of State to join a training course on developing businesswomen’s leadership together with 33 others from different countries.

Back from the course, Le and some of her friends came up with the SME project using what she had learned in the U.S.

The project, which targets at startup small and medium enterprises, received US$18,000 from the U.S. Department of State in 2012.

During its first year, the SME initiators selected 52 enterprising youth out of 150 applicants to adopt the “one helps one” model on, with the rest joining seminars on a monthly basis.

“We offer young entrepreneurs counseling on how to work out their problems, such as personnel recruitment and financial difficulties. Instead of offering them theoretical counseling, we put them in specific situations and help them decide on the most appropriate solutions,” shared Ted Nguyen, a Vietnamese American businessman who joins the SME program.

“What’s we are doing is also a meaningful community corporate obligation,” he added.

Le- the project’s initiator- said from 2015 on the SME program needs more experienced businesspeople as mentors and their monetary contributions if the program is to be developed further.

“Sometimes all that a young entrepreneur needs to survive their corporate crisis is some sound advice,” said Nguyen Thu Ha, an independent counselor who joins the program.

Nguyen Xuan Thoi, director of World Kids kindergartens, who had no formal training in business, shared the SME program and its mentors have helped him considerably in developing his business from scratch.

“I find what we learn from the mentors, especially the things we weren’t taught at university, enormously helpful,” shared Nguyen Huu Quang, director of the Vietnamese branch of Personify Corp.

Upon graduation from a local university, Quang landed a scholarship to study for a Master’s degree in business administration in the U.S.

He shared he was initially quite reluctant to join the program, but decided to give it a try.

The mentoring he has received since last year helps his company make noticeable strides, with a year-on-year rise in revenues.

Some international funds recently invested over $7 million into Quang’s company.

Quang and Thoi both expressed their wishes to join the program as mentors later.

Pham Phuong Thao, who runs a 1.8 hectare farm, a 1,200m2 garden home to vegetables typical of temperate climate in the Central Highlands province of Lam Dong; and two organic food shops in Ho Chi Minh City, shared she learns a great deal from the one- hour talks with the SME program’s mentors.

She has partnered with local farmers by selling their healthful produce, and investing in and harvesting farmers’ crops. Ted Nguyen and Le shared they are eager to help those whose business startup stories are covered on Tuoi Tre (Youth) Newspaper.

They plan to expand the program from next year on by cooperating with corporate associations and groups to recruit more mentors and organize training courses.