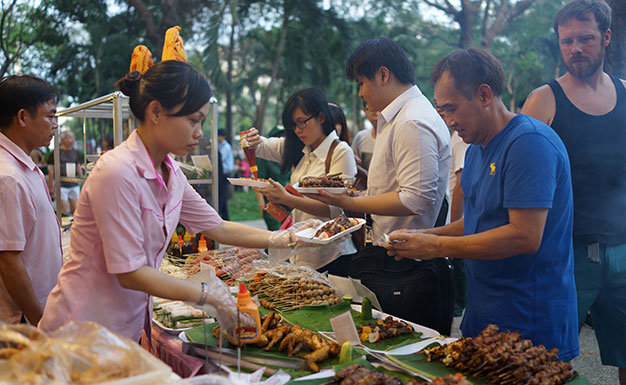 December is the month of promotions in Ho Chi Minh City, with a shopping-tourism-cuisine campaign running from now until the end of the year in the hope of boosting year-end sales, one of the program organizers said Thursday.

The “promotional month” is an effort of the city’s Department of Tourism to boost consumption and make up for the tourism industry’s revenue losses in the second half of the year, deputy director of the department La Quoc Khanh told Tuoi Tre (Youth) newspaper during the opening ceremony. Khanh is the deputy chief organizer of the “promotional month.”

Ho Chi Minh City saw a strong decline in the number of Chinese-speaking tourists after China illegally placed an oil rig within Vietnamese waters in May, Khanh said. Beijing then withdrew the drilling platform from the waters in mid-July following fierce protests from Hanoi and the international community.

The dispute has hurt the city’s tourism industry and the year-end promotional campaign is thus a chance to offset the loss, Khanh added.

Around 500 businesses, including retailers, hotels, restaurants and healthcare facilities have signed up for the program, according to an official from the tourism department.

Retailers are offering discounts ranging from five percent to 50 percent on their products, while restaurants and tour organizers cut their service prices by 5-20 percent and 5-30 percent respectively, Khanh said.

One of the key events of the month-long program is the “Taste of the World 2014” culinary festival, which kicked off at 23-9 Park in the downtown area on Thursday evening.

The 9th annual four-day festival allows visitors to enjoy a wide variety of dishes from more than 20 countries and territories at 120 booths operated by 60 businesses, including hotels and restaurants.

A fair intended to boost consumption is also slated to run from December 28 to January 3 at the Phu Tho Sports Hall in District 11.