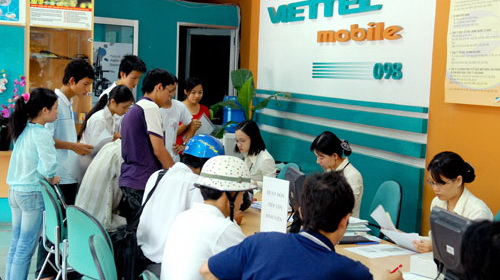 Viettel Global, the international investment arm of the military-run Viettel group, will cooperate with companies in Myanmar to establish Viettel Myanmar to implement the investment in a telecommunications network project in the Southeast Asian country.

The decision came after a vote of Viettel Global’s shareholders in it shareholders’ meeting on last Wednesday.

The total investment of the project is expected to be at $ 1.8 billion, in which the total money funded by Viettel Global is approximately $800 million, the rest,  about $ 1 billion, will be covered by its foreign partners.

As the investment of the project is expected to exceed half of the total assets recorded in the most recent audit report of Viettel Global, according to the company’s rules, Viettel Global is required to consult with its shareholders before implementation.

As its mother firm, Viettel group, owns 97.58 percent of the stake in Viettel Global, the plan will easily be adopted in the shareholders' meeting.

Currently, Viettel Global has invested in eight countries, including five operational projects in Cambodia, Laos, Haiti, Mozambique, and East Timor. Three other projects in Africa, including Burundi and Cameroon is expected to go into operation in the 4th quarter of 2014 and the 3rd quarter of 2015.

Viettel Global’s project in Tanzania is completing the procedures to deploy network infrastructure.

The attraction of the Myanmar market

Prior to 2014, the telecommunications market, including mobile and landline networks, in Myanmar was monopolized by state company MPT.

From 2014, there were two more international network operators, Ooredoo (Qatar) and Telenor (Norway).

In 2013, Ooredoo and Telenor won the bidding to run their own telecommunications network in Myanmar after paying a very high bid. Viettel also participated in this bidding but did not succeed.

The representative of Viettel then said Viettel would not give up because it can continue to cooperate with Telenor and Ooredoo in joint investment projects in the telecommunications industry in Myanmar.

In Vietnam, the figure is 94 percent of the population in the age of mobile usage with 66.7 million users.

In Myanmar there is a large difference in the rate of mobile penetration between the city and the rest of the country.

3G penetration rate is much lower, only 3.7 percent and the density of Internet users as of May 2014 reached 4.8 percent (nearly 2.9 million users).