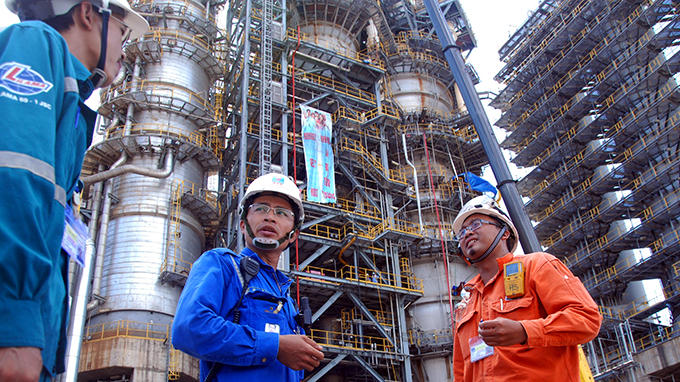 Binh Son Refining and Petrochemical JSC (BSR), the operator of Vietnam's sole operational oil refinery of Dung Quat, has sought for further reduction in import tax levied on diesel oil because without the tax cut, diesel oil churned out by the facility cannot compete with that imported from ASEAN countries.

In a document submitted to the Ministry of Finance earlier this week, Dinh Van Ngoc, general director of the company, proposed a reduction of diesel import duties to below 10 percent.

Currently, diesel oil produced by the US$3 billion refienry is subject to a 20 percent import tax, a 10-percent drop from the previous rate, though it is domestically made following a special financial mechanism applied to the refinery, which was commissioned in 2010.

Meanwhile, the import duties imposed on the similar petroleum product imported from ASEAN countries has dropped to 15 percent since this year following the integration roadmap in ASEAN Economic Community of Vietnam.

Thus, the price of diesel made by Dung Quat will be around US$10 per barrel more expensive than its regionally produced rivals, Ngoc said in the document.

With the current tax regime, diesel oil refined by Dung Quat cannot compete with that imported from other ASEAN countries, he added.

Diesel oil is the main product of the Dung Quat oil refinery, as it accounts for about 50 percent of the total output of the plant. As a result, if it is not sold well, the revenue of the plant will be affected, thus badly influencing state revenue.

Earlier this month, BRS also sent a document with the same import tax cut proposal for many kinds of petroleum products, stressing that the plant will shut down if there is no change in tax policies for those products.

BSR said in the document that many of its customers may switch to buying from other ASEAN countries, whose products are now cheaper thanks to the tax cut taking effect since the beginning of this year.