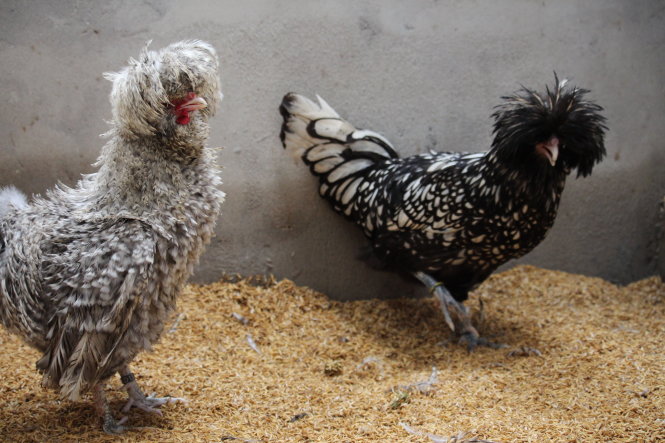 An enterprising young man in Vietnam decided to drop out of university and has created a thriving business out of peculiar-looking poultry and birds, with some fetching up to US$2,500 apiece.

Phan Minh Hong, who resides in the southern province of Binh Duong, launched his start-up business empty-handed and has developed it into a VND4 billion (US$183,739) enterprise.

Hong’s company has grown into a major provider of exotic, rare breeds, including the Polish Frizzle chicken, which is known for its gorgeous frizzled plumage; as well as Dong Tao, Ho and nine-spurred chicken, which are rare breeds indigenous to Vietnam.

The fowl is native to Java Island in Indonesia.

The bird, which fetches up to $2,500 apiece, is currently a sensation among local ornamental poultry and bird enthusiasts.

Hong, 30, showed a Tuoi Tre (Youth) newspaper reporter his flock of some 100 such chicks which are less than one month old.

The batch is the fruit of his successful breeding four months after importing them.

All of these fledglings have been bought for VND1.5 million ($69) each.

Over half a year ago, such young “Ayam Cemani” birds were priced at VND3.5-5 million ($161-230) each and were only delivered after being booked two months in advance, Hong revealed.

The chickens are allowed to range freely in his backyard instead of being kept in coops as other varieties do to satisfy their need for ample living space.

The birds stand out from others in that they are jet black from head to tail, including their plumage, eyes, skin, tongue, throat, and flesh.

Its blood, which is much darker red than that of others, is believed to wield magical powers and is generally used for sacrificial rituals in Indonesia.

The ‘demon-faced’ chicken is also a singular type in Indonesia, its home country, Hong added.

In 2014, Hong learned of an ornamental creature fair in Hanoi where such jet-black birds were put on show and available for sale at a whopping VND50 million ($2,300) apiece.

He then contacted the birds’ owner in the Vietnamese capital who agreed to sell them to him for VND70 million ($3,215) a pair.

Hong then asked a Vietnamese poultry importer to find some breeding birds of the variety from Indonesia.

Through a broker, Hong purchased a brood of 14 parenting fowls from an elderly Indonesian man who offered discounted prices of VND37 million ($1,700) a pair, and flew them to Vietnam in February.

One died during the transport process.

It took around one month for the hens to lay eggs due to the change in their habitat.

They now lay a daily average of six or seven eggs, which are put into incubators to help them hatch.

Four months after the import of the parenting birds, Hong has had his birds hatch around 200 fledglings, which have all been bought or ordered by clients from different provinces.

He gladly said that he has almost recuperated his investment.

A mother hen of the Ho breed, a rare breed indigenous to Vietnam, is seen tending to her young brood in this Tuoi Tre file photo.

A seven-spurred chicken, believed to be a descendant of the extremely rare nine-spurred breed, is pictured in this Tuoi Tre file photo.

Starting business from a hobby

Hong recently transformed a 700-square-meter café, located in Di An Town in Binh Duong, into his farm.

The young man has his fingers crossed that the farm will provide long-term shelter for his prized, pricey flock.

During his economics university years, Hong, who hails from the Mekong Delta province of Ben Tre, noticed that dealers often sought birds which abound in his hometown for high prices.

The young man returned to his hometown in search of supplies, snapped photos of the birds, and made a decent living by selling them online.

In 2006, in his second university year, Hong dropped out of school, got married, and began trading full time in various breeds of birds and ornamental poultry, particularly Dong Tao chickens, which became the ‘divas’ of the decorative bird world four or five years later.

Back then he bought two Dong Tao roosters and four hens.

The eggs and fledglings produced by his original Dong Tao brood could not meet the surging demand for the fowls, so Hong spent a lot of money buying more parenting birds.

At peak times, the fowls fetched dozens of millions of dong (VND1 million ~ $46) apiece, as they were highly sought after by local buffs for their rarity and since they are native to Vietnam, as well as their unusually large, coarse-looking legs.

Demand has fallen recently, with prices for young chicks used for breeding purposes dropping from VND1 million ($46) to around 50,000 ($2.3) each.

However, according to insiders, most of these fledglings available on the local market are of mixed breeds, while pure-bred birds remain hard to come by.

Hong’s success has been hard-earned.

As he and his wife embarked on their business, they were constantly on the move as neighbors or landlords in Ho Chi Minh City and Binh Duong Province kept complaining about the foul odor and noise emitted by their flock until the couple settled down in their current farm.

Undaunted, Hong and his wife single-mindedly invested their time, energy, and money into their business.

Since 2010, he has brought home many rare, gorgeous varieties from other countries.

Among them are the Polish Frizzle chicken, which he bought for VND50 million ($2,297) a pair; and a giant chicken from the UK for half that price each pair.

The giant roosters weigh between nine and 12 kilograms each. The young chicks for breeding purposes now sell for VND1 million ($46) to VND1.2 million ($55) each.

Insiders in Dong Nai Province, which neighbors Ho Chi Minh City, revealed that these above-mentioned breeds are scarce in Vietnam.

Local aficionados tend to buy only a few pairs to keep for decorative purposes, not for consumption, due to their exorbitant prices.

Hong said he will develop his jet-black Indonesian “Ayam Cemani” brood the same way he did to his Dong Tao flock earlier, but it will take a few more years for the all-black fowls to enjoy the same spotlight as the Vietnamese variety did several years ago.