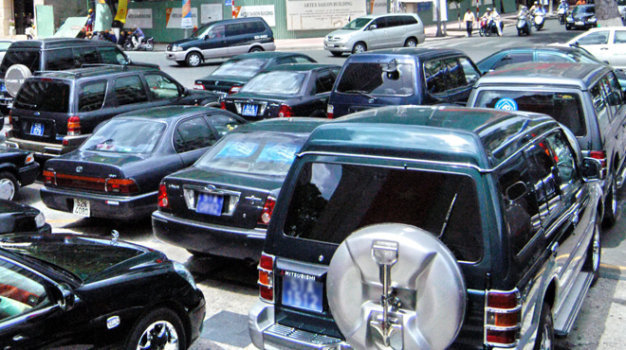 The Ministry of Finance has submitted a new regulation regarding the use of public-owned automobiles by state officials in Vietnam to the Prime Minister for approval to lessen wastefulness, an office chief under the ministry told a press meeting on Friday.

Tran Duc Thang, head of the Department of Public Asset Management under the Ministry of Finance, said at the Friday press conference, organized to report a new policy on the management of public automobiles, that 40,000 state-owned cars are currently in use in the country.

The large number is put down to such agencies’ purchase exceeding what is allowed, and their improper use and liquidation of the vehicles, Thang noted.

The finance ministry has recently submitted Decision 32 to the Prime Minister for approval in an effort to redress the problem.   The decision, which includes a new regulation as to the quota of state-owned cars at state administrative agencies and how they should be used, aims to ensure no increase in the number.

Specifically, replacement is only permitted for cars with 15 years of use instead of 10 years as stipulated in the current regulation, or those which have covered at least 250,000 kilometers, with their safety levels no longer ensured.

A state administrative agency is armed with one or two cars at most.

Leaders of localities will be required to check on the number of state-owned vehicles at such agencies, and have some of them transferred to others which are short of such vehicles.

They are also asked to hand the automobiles back to the finance ministry for more transferal or sale.

According to Thang, the new regulation also stipulates more articulately about who are entitled to the use of state-owned cars.

Only top-notch leaders, such as deputy ministers and above, are eligible for the use.

Only provincial sectaries and their deputies, and chairs of provincial People’s Committees and Councils are allowed to ride on public cars from home to their workplace.

Other high-ranking leaders, including heads of departments, except in Hanoi and Ho Chi Minh City, are not authorized to such rides, according to the proposed decision.

Thang expected that the new decision would cut the number of state-owned automobiles by 7,000 cars, and save approximately VND500 billion ($21.6 million) per year for the national budget.