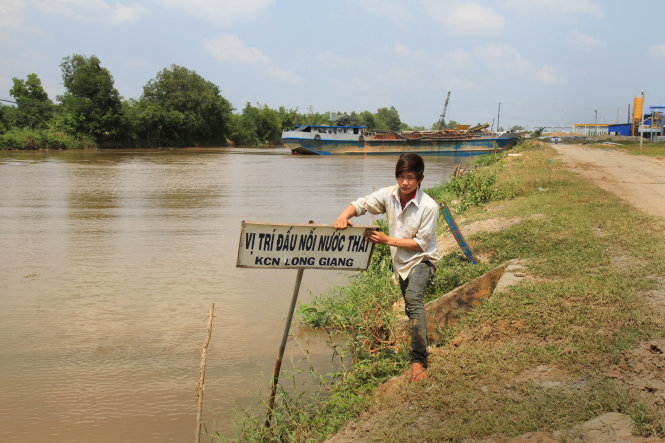 An environmental expert has called on the Tien Giang administration to pull the plug on a Taiwan-invested paper project he says may pollute one of the most important waterways in the province as well as the Mekong Delta.

Assoc. Prof. Le Trinh, head of the Institute for Environmental Science and Development, is so concerned about the potential negative impacts the Dai Duong paper plant will have on the province’s Tien River, that he has petitioned the provincial administration to stop the project.

The 250-kilometer long Tien (Front) River and 200-kilometer Hau (Back) River are the two most important waterways in the Mekong Delta in southern Vietnam. The Hau River is also under threat from another paper mill, run by Hong Kong’s Lee & Man Paper.

The paper plant discharges its wastewater through two local canals before finally reaching the Tien River, where “many of the province’s biggest water suppliers collect surface water for treatment before supplying clean water to millions of households,” Trinh said in his petition.

The pundit, who is also deputy head of the Vietnamese Council for Environmental Impact Assessment, said the paper mill will also affect numerous local farmers as their agriculture production may be “adversely affected by the facility’s wastewater and smoke.”

According to Assoc. Prof. Trinh, the paper making industry requires a number of chemicals for production, and the wastewater dumped by the facility contains various hard-to-treat toxic materials.

Among those toxins are organic chlorides such as dioxin, which can be absorbed by fish and other aquatic animals before they are served at the dinner table.

Trinh said several studies prove that it is impossible to completely remove dioxin from chlorine dioxide, the chemical compound used for pulp whitening. “With that in mind, it is impossible to not worry about the Dai Duong plant, especially when it dumps as many as 4,950 cubic meters of wastewater on a daily basis,” Trinh said.

The expert added that the wastewater treatment capacity of the Long Giang Industrial Park is unable to completely handle such a large amount of wastewater from the paper mill.

“If we let the plant operator treat its own wastewater, who can be sure that it will not cause an environmental incident?” he questioned.

In that scenario, Trinh said, toxic wastewater will spill to the Tien River, its tributaries and the local canal systems.

The number of people affected by such a disaster would be equal to that of the Formosa crisis in central Vietnam, he added.

“As an expert who has been studying the environment in Tien Giang for years, I earnestly suggest that the provincial Party Committee, People’s Council and administration stop allowing this project,” he said.

According to documents reviewed by Tuoi Tre (Youth) newspaper, Chang Yang Holding first proposed the Dai Duong project to Tien Giang authorities in January 2016, and submitted the necessary documents and papers on February 18.

Less than a month later, on March 11, the Tien Giang administration gave the developer in-principle approval for the proposal, and only four days later, the Taiwanese company received the investment license for the project, with a total investment of US$220 million.

With all paperwork completed, the developer leased as many as eight land plots, spanning a total of 227,530 square meters in the Long Giang Industrial Park, to build its plant.

The Dai Duong paper mill produces four types of paper, including the double-ply Duplex and Kraf paper from scrap papers, with a total capacity of 175,000 metric tons a year in its first phase.

The developer has received a number of incentives from the Tien Giang administration, such as a low corporate income tax of 10 percent, compared to the normal 20 percent. The Taiwanese firm also enjoys a corporate income tax exemption for four years from the first year it begins to post a profit, and a 50 percent tax cut for the subsequent nine years.

Pham Anh Tuan, deputy chairman of Tien Giang administration, confirmed to Tuoi Tre that he had received the ‘sincere petition’ from Trinh.

“We will invite scientists to assess the environmental issues in regard to the Dai Duong plant Trinh has raised,” Tuan said.

“Tien Giang authorities will strictly follow the order by the prime minister, which is to never trade the local environment for new economic projects.”