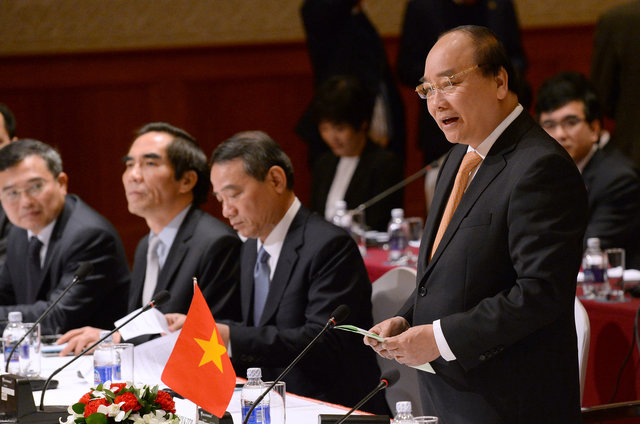 Vietnam is courting high-tech Japanese investment and wants Tokyo to become its top investor, its premier said Tuesday during a visit by Prime Minister Shinzo Abe.

Japan is the second largest foreign investor in Vietnam, a manufacturing hub in southeast Asia seeking to expand exports from apparel and agriculture to high-value good like electronics and automobiles.

“Vietnam wants Japan to become the top investor in Vietnam,” Prime Minister Nguyen Xuan Phuc said Tuesday at a business forum co-hosted by Abe and attended by company tycoons from both sides.

Vietnam has become a fierce competitor to regional neighbours like Thailand, Malaysia, China and Taiwan in tech manufacturing.

Electronic giants like Panasonic, Samsung, Foxconn and Intel have all made significant investments, taking advantage of Vietnam’s comparatively cheap but increasingly well-educated and youthful workforce.

Ties between Tokyo and Hanoi have warmed in recent years, and the world’s number three economy has invested heavily in Vietnam as growth back home has been dragged down by a greying and shrinking population.

The Asian allies have also cosied up in the face of separate disputes with regional powerhouse China over disputed territory in regional contested waters.

Japanese firms are currently involved in more than 3,000 projects worth roughly $42 billion in Vietnam, mostly in the manufacturing sector. It is the leading investor in Vietnam after South Korea.

Tokyo is also looking for new markets to sell major construction projects to.

Abe called on Vietnam to “continue supporting Japanese enterprises (and) listening to experiences from Japanese companies in high-tech areas”.

He said earlier that investments would focus on “projects to upgrade high quality infrastructure”.

The leaders did not outline specific areas of investment, but officials said earlier that Japan was interested in high-speed railway projects and airport infrastructure.

Members of Vietnam’s business community welcomed the push toward high-tech at the meeting, which was attended by several Japanese companies, including Mitsubishi, Canon and Fukuyama Transporting.

“(It) will surely contribute to improving the quality of life in Vietnam,” Nguyen Hoang, CEO of Vietnam’s N&G Investment.

Vietnam has become a hot spot for private investment in recent years, especially in manufacturing and consumer sectors.

Foreign investment shot up nine percent last year compared to the year before, hitting a record $15.8 billion. Though growth has remained relatively strong in recent years, its GDP rose 6.2 percent last year, down from 2015 and falling shy of its growth target of between 6.7 and 7.00 percent.

Abe’s visited Philippines, Australia and Indonesia on his six-day tour of Asia-Pacific before his final stop in Vietnam.

He said Monday that Japan would provide six new patrol vessels to Vietnam as he called for maritime security in Asia.