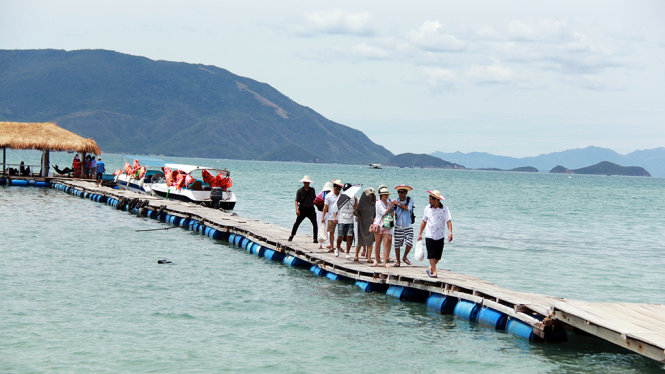 The tourism association of Nha Trang has plans to gather travel agencies exclusively serving Chinese tourists into a ‘club’ in order to better deal with the influx of visitors from China.

Nha Trang, the coastal city in the south-central province of Khanh Hoa, has emerged as a favorable destination for Chinese holidaymakers, who bring revenue to the Vietnamese city, but also numerous issues.

The municipal tourism association has therefore gathered for a meeting on Tuesday, discussing plans to form a ‘welcome club’ for Chinese tourists and resolve the issues that have arisen from their increased numbers arriving in Nha Trang.

At Tuesday’s meeting, more than 20 travel agencies discussed issues such as personnel and operations but have yet to come up with any specific plan for the committee’s establishment.

Khanh Hoa welcomed 4.2 million international visitors, mostly Chinese nationals, between 2010 and June 2016, according to a report by the provincial People’s Council.

In January 2017, the province’s international tourist numbers rose 180 percent year on year to 163,000. More than 102,000 Chinese visitors spent their holidays in Khanh Hoa in January, a massive 374 percent increase on the same period last year.

The province is home to 230 travel agencies, with 66 of them identified as mostly serving the Chinese market.

During this period Chinese tourists have been accused of improper behavior at attractions across Khanh Hoa.

There are also a lack of Chinese-speaking Vietnamese tour guides, leading to a situation in which Chinese nationals illegally work as tour guides and give inaccurate and distorted accounts of Vietnamese history and culture.

“Forming a committee specializing in receiving Chinese tourists is a must,” Nguyen Van Thanh, deputy chairman of the Nha Trang Tourism Association, said.