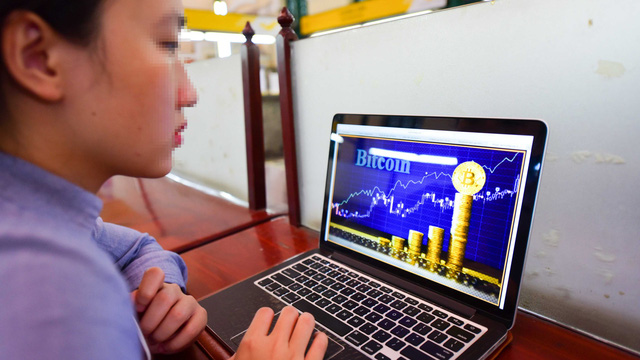 Vietnam’s decision to outlaw the supply and use of cryptocurrency does not stop bitcoin investors and enthusiasts from actively engaging in trade and transactions with the digital money.

The amended Vietnamese Penal Code, taking effect on January 1, 2018, criminalizes the issuance, supply and usage of cryptocurrency, a digital or virtual currency that uses cryptography for security.

While it is less than a week from the effective date, some groups and organizations are still luring investors in bitcoin and other cryptocurrencies with promises of easy and hefty profit.

Some bitcoin ATMs have also been installed in Ho Chi Minh City, where people can withdraw cash from their digital money accounts.

Many service venues in the southern metropolis accept payment in bitcoin, but some of them have stopped the practice after the State Bank of Vietnam outlawed cryptocurrency as a means of payment in October.

Tuoi Tre (Youth) newspaper met Le, a broker who encourages people to buy ‘education packages,’ or online courses, and have the investment converted into a cryptocurrency known as Onecoin.

“[Onecoin] will be a global currency, and join the U.S. dollar and Euro as the world’s largest reserve currencies,” Le told Tuoi Tre.

Even so, he admitted that Onecoin is being traded at a ‘production price’ of only VND500,000 ($22) a coin, because “it has not been officially listed yet.”

“By October 2018, it will have been listed and prices will have skyrocketed as bitcoin now,” he added.

The broker, however, derailed the discussion when asked if a Onecoin investor can exchange their investment back into cash.

Le asserted that a house in District 7, Ho Chi Minh City was once put on sale in Onecoin and gave Tuoi Tre the link to a website where goods are traded in the digital money.

However, upon visiting the website, Tuoi Tre found that the products available for Vietnamese buyers listed there are only sport shoes and food, rather than real estate.

Onecoin, which pitches itself as the next bitcoin, has a representative office in Bulgaria, according to its website.

The currency, however, has been described by multiple national authorities as a Ponzi scheme, The Atlantic reported in May.

A Ponzi scheme is a scam promising high rates of return with little risk to investors. The scheme yields returns for old investors by luring new ones, with the conman using the latest victims' money to pay the previous ones.

In late April, financial enforcement officers in Mumbai raided a meeting held by Onecoin and ultimately jailed 18 company representatives and seized more than $2 million in investor funds, according to the U.S. magazine.

Tam, a 39-year-old resident in Phu Nhuan District, Ho Chi Minh City, describes himself as a small bitcoin investor that makes “easy money from simple investment” – using cash to buy bitcoin and sell them when prices are up.

“You only need an email to create an account on the Blockchain app to become a bitcoin speculator,” he told Tuoi Tre.

Tam revealed that investors like him would exchange information via groups on social media or messaging apps such as Telegram.

Besides investors who use real money to trade bitcoin, there are also bigger players who heavily invest in powerful computers to ‘mine’ the cryptocurrency, according to Tam.

Bitcoin mining is the process of solving puzzles – complex computer algorithms set by the blockchain that powers the cryptocurrency – to be awarded new coins.

Phu, a bitcoin miner who lives in District 12, Ho Chi Minh City, made no secret that he has invested in four ‘mining machines’ and now makes some VND5 million ($220) a month from the cryptocurrency.

“There are many such farms with thousands of computers across Vietnam, which are run by ‘bitcoin big bosses’,” Phu added.

Computers used to mine bitcoin are those with extensive graphic cards and powerful processing power, entailing huge electricity consumption.

As of October 31, the Ho Chi Minh City customs department had received clearance applications for the importation of 1,478 bitcoin mining machines by local companies and individuals.

Many experts said investing in bitcoin is nothing different from U.S. dollars or Euro, except for one key difference that the former is totally ‘virtual,’ which means it does not have a physical form.

T., a major investor in Ho Chi Minh City, told Tuoi Tre that the safe way to play the game is to buy and sell bitcoin, based on prices listed by international exchanges, for profit.

However, T. warned that people should be wary of possible fraud as many dubious investment channels have recently emerged and target greedy investors who want to earn easy money.

The investor also acknowledged that investing in bitcoin in Vietnam is a risky business as the government does not recognize this cryptocurrency.

“This means when something goes wrong, authorities will not step in to help you,” he said.

All cryptocurrency transactions in Vietnam are being made based on trust between traders, so “it is not unusual if you pay an investor upfront and receive nothing from him,” T. warned.