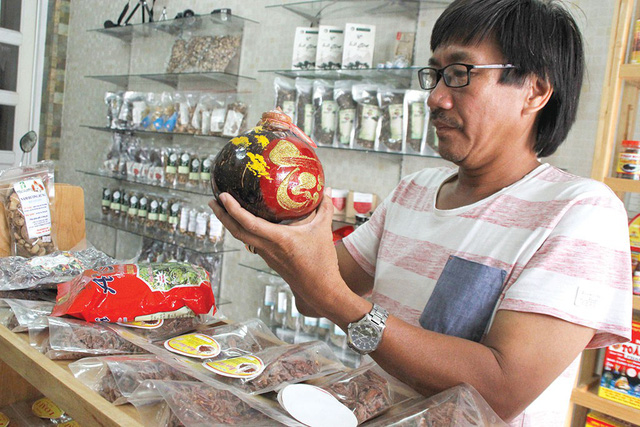 Residents in Ho Chi Minh City have shown a greater desire for a variety of specialty food produced domestically and imported from other Asian countries as the Vietnamese Lunar New Year, otherwise known as Tet, approaches.

It is a customary practice to purchase food, especially meat, to process or store before the Tet holidays, due in three weeks.

During the Lunar New Year period, markets and food shops do not typically open.

During this festive period, people consume special products not enjoyed on ordinary days, explaining why the demand for specialty foods increases during this time period.

The demand for local food specialties has also steadily risen.

Nguyen Minh Dien, manager of the Ba Mien restaurant in District 10, stated that “about sixty or seventy percent of goods recently purchased are diverse specialties from a number of regions in Vietnam."

A three- or fourfold surge is expected in the lead-up to the Lunar New Year.

He added that the products range widely, from dried shrimp, dried buffalo meat to dried meat of nhai – a type of long-legged frog, selling for no less than VND500,000 (US$22) per kilogram.

Dien also projected that these specialty dishes are likely to be in short supply as many larger food companies have purchased them wholesale.

A common present during the national holiday is the Tet gift basket, which is usually made of bamboo and includes items like wine, traditional fruit preserves and sausages.

According to Luong Vu Trong Nghia, manager of the Be Bu restaurant in District 3, customers tend to order gift baskets worth VND500,000 to VND2 million ($88) each, containing five to ten food specialties.

Each year, the restaurant purchases 40 varieties of local specialties from across Vietnam.

One new feature of this year’s festivity is the strong presence of foreign foods, such as Siem Reap dried buffalo from Cambodia, desiccated dates from India, mini-sausages from Hungary, and smoked goose wings from Russia.

Vietnam’s food market is infested with mutual mistrust and worries about the hygienic condition of food, including pork.

Le Thi Huong, a woman trading pork, said she has received numerous orders for unadulterated ‘clean’ pork from customers, and will be making home deliveries upon request.

According to its owner, about 30 to 40 people have placed orders for the clean pork from the Vuon Que restaurant in Binh Thanh District, Ho Chi Minh City.

This figure is expected to ascend until the end of the Lunar New Year festival.

In addition to pork, seafood like squid and mackerel has also sold like hot cakes, with demand doubling, according to Ho Thi Vy, a Ho Chi Minh-based seafood trader.