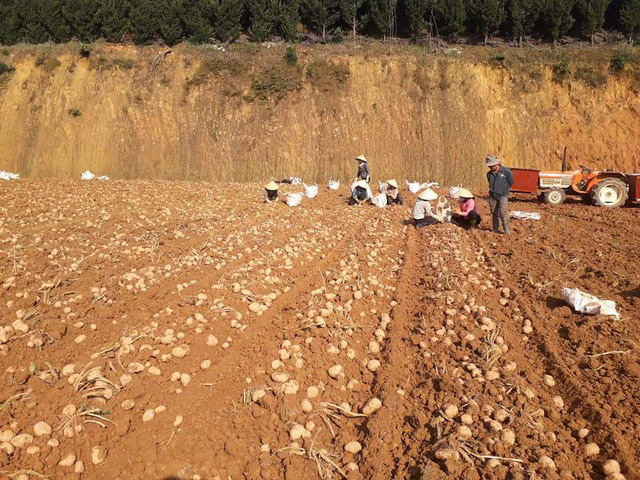 The administration of a region in Vietnam’s Central Highlands has planned to create packaging for its own famous type of vegetable with a view to helping buyers differentiate its product from the counterfeit Chinese one, and safeguarding local farmers’ business.

Lam Dong Province is expected to deliver hundreds of thousands of packages to farmers of Da Lat potatoes – those grown with high quality in the provincial capital of Da Lat – in a bid to protect the reputation of the produce.

Emblazoned on the wrapping material are the trademark, distinctive colors and the slogan ‘Da Lat – Wonderful essence from fertile land,’ which has been used for local produce and handicrafts since late last year.

The packages are designed to contain two to five kilograms of potatoes each.

The Lam Dong administration’s move is to respond to the licensed influx of Chinese potatoes, hundreds of tonnes annually, to the province, where many Vietnamese sellers give them a deceptive strong resemblance to the native vegetables.

The foreign potatoes, with dark yellow skin, are cleaned with water and covered with the red earth typical of the arable soil in the area.

Before masquerading, Chinese potatoes fetch prices four or five times lower than those of Vietnamese ones, proving immensely lucrative for unscrupulous traders.

“Da Lat potatoes have had a good reputation for a long time. Now when they have their own packages, buyers can recognize and choose them without hesitation,” said Lai The Hung, an official from the provincial department of agriculture and rural development.

He was implicitly referring to the tendency that Vietnamese people keep an alert eye on any products made in China.

Chinese potatoes dominate the local market in the rainy season, when Vietnamese ones reach the bottom in production, noted Nguyen Hong Phong, director of a company in Lam Dong.

“Consumers are unwilling to buy potatoes whenever news spreads that Chinese potatoes pervade the market. We then take care of our potatoes in the fear that buyers won’t support us,” said Tran Huu Tho, a farmer growing potatoes in Da Lat for many years.

The government said they set their sights on cracking down on any attempt to put Chinese potatoes in packages meant specifically for the native vegetables.