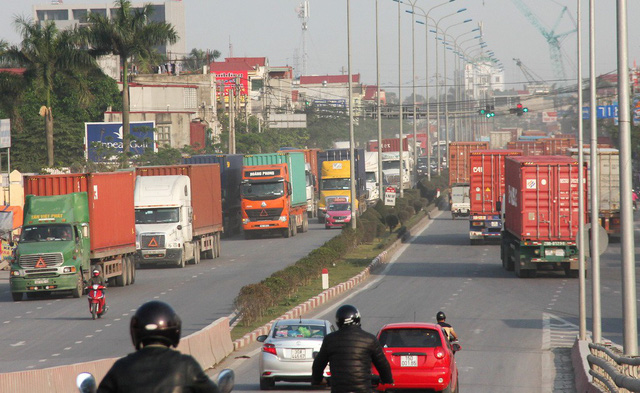 High logistical costs, especially mounting freight rates, are putting businesses in Vietnam at a disadvantage with regard to price competitiveness.

While goods can be produced cheaply in Vietnam, they are often sold at a much higher price due to added costs of transportation, experts said at a national conference in Hanoi on Monday.

The government-sponsored conference was aimed at seeking ways to reduce logistical expenses and improve transport connectivity within the Southeast Asian country.

Nguyen Thanh Vang, a supplier of farm produce in Lam Dong Province in the Central Highlands, said it could cost VND2,000-5,000 (US$0.09-0.22) to transport a kilogram of vegetables from farms in Lam Dong to Ho Chi Minh City and other neighboring provinces.

This cost causes the price of an agricultural product to be raised by 10-50 percent compared to how much it is sold at farms, Vang said.

“Apart from the inevitable expenditures for vehicle maintenance, gas and drivers’ wage, many other unnamable costs make up a third of our operation expenses,” said Doan Huu Huynh, who owns a freight business in Da Lat City.

Transportation currently accounts for 59 percent of logistical costs for businesses in Vietnam, the Ministry of Transport said, citing a World Bank report.

In total, Vietnam spends an amount equal to 20.9 percent of its GDP on logistics.

Fuel prices contribute 30-35 percent of costs for north-to-south freight transport in Vietnam, followed by road tolls (15 percent) and ‘unofficial fees’ (five percent). The remaining 50-55 percent is made up of other costs.

Transporting a standard container of goods from Ho Chi Minh City to Hai Phong City in northern Vietnam costs around VND34 million ($1,500) by road, VND12.4 million ($546) by train, and VND5.2 million ($229) by sea, according to Le Duy Hiep, president of the Vietnam Logistics Association.

Vietnamese Prime Minister Nguyen Xuan Phuc stressed the need to seek effective measures to improve transport connectivity among ports, railway stations and airports in Vietnam, with the ultimate goal being to reduce logistical costs for businesses.

The government leader also ordered the Ministry of Public Security to work with other bodies in reducing costs for freight businesses.