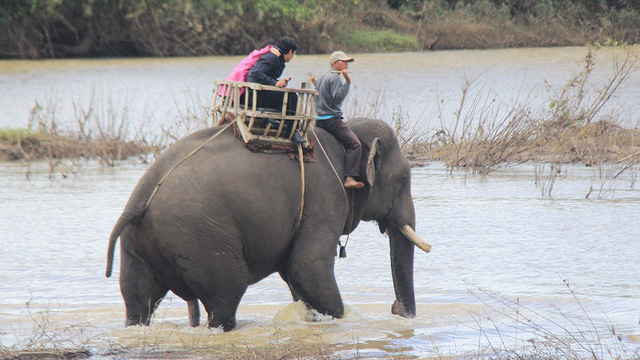 A wildlife protection organization has signed an agreement to support a Vietnamese national park to gradually switch from elephant tourism, whereby the animals are forced to take tourists on rides, to other kind of products that ensure the wellbeing for the mammals.

The Yok Don National Park, located in the Central Highlands province of Dak Lak, is expected to use the US$65,000 credit support, provided by the Animals Asia with funding from the UK’s Olsen Animal Trust, to replace the elephant riding practice with alternative elephant-friendly tourism.

According to the five-year project from July 2018 to April 2023, Animals Asia will transfer $13,000, as the first installment of the grant, to Yok Don within ten days from the July 13 signing of the agreement, Pham Tuan Linh, acting director of the park, said on Sunday.

Once elephant riding is no long available at Yok Don, the elephants will be able to travel freely in the park, instead of being constrained with chains so tourists can take ride on them, allowing visitors to follow, watch and learn about how these magnificent creatures really live and behave in their forest home.

The state-run park will also have to commit to no elephant in any activities that Animals Asia considers potentially harmful to the welfare of the mammal animal.

The funding will also ensure that the present legal owners of the elephants will not lose their livelihood.

If successful, this model of cruelty-free elephant tourism could set an example for other provinces in the country, and even the region, to follow, Linh said.

Nguyen Thi Thanh Ha, director of the Thanh Ha eco-tourism in Dak Lak, spoke highly of the project, but suggested that it should be carried out synchronously throughout the province, not merely in Yok Don.

“If we all switch [from elephant riding to other products] at the same time, it will be more effective in raising awareness of animal welfare needs,” Ha said.

Dak Lak is famed for its elephant tourism where the elephants used for riding typically endure conditions which greatly harm their welfare.

When not giving rides, the animals are often chained, unable to express natural behaviors and kept in isolation.

Founded in 1998, Animals Asia is a Hong Kong-based charity that seeks to end cruelty to animals in Asia. The foundation promotes compassion and respect for all animals and works to bring about long-term change.

In May, another animal protection entity, Asia for Animal Coalition, sent a letter to Vietnam’s Minister of Culture, Sport and Tourism, suggesting that it put a stop to wild animal abuse for entertainment purposes, such as in circus performances, at some local  theme parks and facilities.