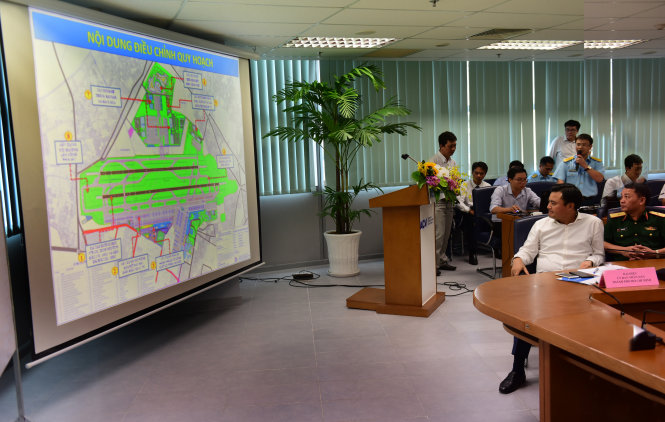 On Monday afternoon, Deputy Minister of Transport Le Dinh Tho presided over the announcement of the detailed planning of Tan Son Nhat International Airport until 2020 with orientation to 2030.

Accordingly, the total area planned for the airdrome is 791 hectares, including 545 hectares of the existing Tan Son Nhat land.

According to the adjusted plan, the passenger terminals T1 and T2 will be expanded to increase the capacity to serve about 30 million people per year from the current 25 million.

The planning also adds Terminal T3 to the south of the airport with a capacity of 20 million passengers.

The two existing runways will be kept intact, while three parallel taxiways, five rapid exit taxiways (RET) and connecting taxiways will be added.

Fifty-six airport parking lots will be supplemented to the front of Terminal T3 and in the southwest courtyard, increasing the airport's total aircraft aprons to 106.

With this range of access to the airport, the planning aims to expand two-lane Hoang Hoa Tham Street and single-track Than Nhan Trung Street into four lanes, and to widen 18E Street to four or six lanes.

Overpasses will also be studied to be built from Hoang Van Thu Park through to Tran Quoc Hoan Street, and from Thang Long Street to the Chao Lua football pitch on Phan Thuc Duyen Street.

The elevated route from the end of the T2 international terminal to the T1 domestic terminal, following Thang Long Street to Phan Thuc Duyen Street, will also be studied for additional planning.

According to the investment’s roadmap, the construction of Terminal T3, airport aprons, traffic roads and other auxiliary works in the southern land plot allocated by the Ministry of Defense will be given immediate priority.

In the northern area of the airport, priority will be given to reservoirs and forced pumping stations to prevent flooding.

The new routes to access the airport will be promptly invested in once the detailed planning has been approved, in accordance with the transport planning of Ho Chi Minh City.

According to Deputy Minister Le Dinh Tho, the ‘new face’ of Tan Son Nhat is expected be put into operation with a capacity of serving 50 million passengers per year, by the year 2022.

The transport deputy minister is confident that the detailed planning of Tan Son Nhat International Airport will be carefully carried out this time, in order to avoid renovation and upgrades in just a few years.