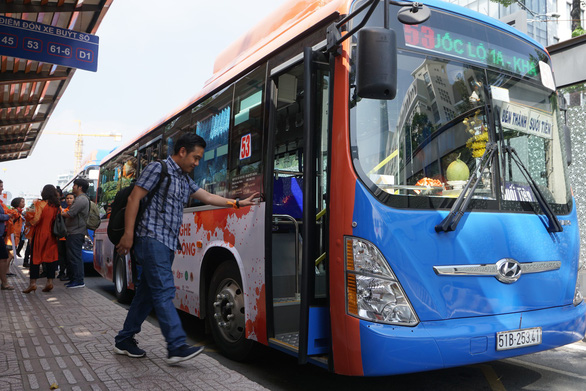 The number of passenger journeys on buses in Ho Chi Minh City in 2018 declined by a slight 3.5 percent from a year earlier, the municipal Department of Transport reported on Monday.

People in the southern metropolis made 571 million journeys on public buses last year, down by 21 million trips from 2017.

The municipal Department of Transport attributed the bus use decline to several reasons, including the degradation of the city’s public bus fleet.

Besides that, input costs such as new vehicles, fuel, and worker wages all increased, while their proposals to raise bus ticket prices were not approved, resulting in unstable operations on some routes for bus companies, greatly affecting their service quality.

Moreover, the number of bus routes also decreased markedly in 2018. To date, Ho Chi Minh City has ditched seven routes, including five subsidized routes, whose ticket prices are partially covered by the city’s budget, and two routes without subsidies.

On top of that, the development of ride-hailing Grab also put greater competition on buses as passengers tend to prefer the tech-based service for short distances due to convenience, maneuverability and little difference in price.

To address this difficulty, the Department of Transport plans to take multiple measures in order to encourage more residents to use the form of public transportation.

The transport administrators aim to overcome the aforementioned weaknesses and expand bus network, as well as setting aside additional budget in support of loan interest and allocation of bus subsidies for the 2018-20 period.