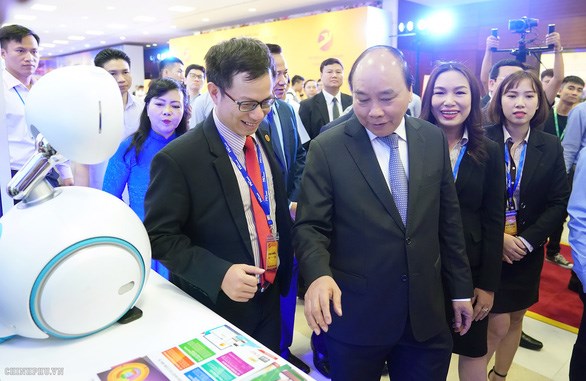 The inaugural National Forum on Developing Vietnam Technology Companies was held in Hanoi on Thursday, aiming to build up a community of Vietnamese technological companies under the slogan of “Make in Vietnam.”

The event, themed “Aspiration, Vision and Strategy for a Prosperous Vietnam,” was attended by Prime Minister Nguyen Xuan Phuc and brought together about 1,000 delegates representing the government, ministries, agencies and localities, along with hundreds of domestic and foreign experts and technology businesspeople.

The forum is expected to turn domestic tech companies into momentum to create economic breakthroughs, thus helping Vietnam escape from the middle-income trap and become a developed nation.

Attendees discussed a range of issues such as technology-related problems in Vietnam, how to move out of the middle-income trap, policies and solutions to develop Vietnamese tech firms, and solutions to connect them with those in such sectors as agriculture, healthcare and public services.

In his remarks, PM Phuc said it is essential that technology be considered the key factor to take Vietna out of the middle-income trap and become a developed country.

Vietnam’s information-technology sector raked in some US$98.9 billion in revenue in 2018, $94 billion of which came from export activities, according to the Vietnam News Agency.

The sector also reported a trade surplus of some $26 billion and contributed nearly VND50 trillion ($2.16 billion) to the state budget.

“The ICT sector also created more than 1 million jobs for local workers,” the Vietnam News Agency quoted Deputy Minister of Information and Communications Phan Tam as saying at a press conference in Hanoi on Monday.