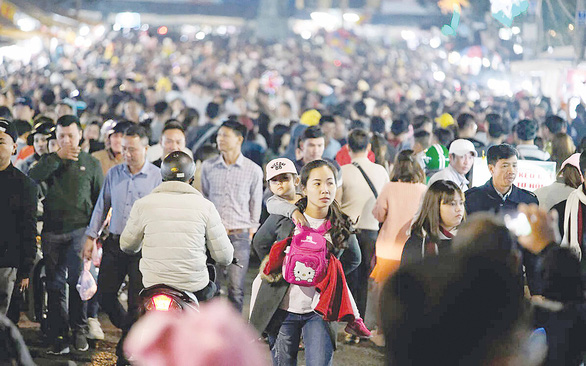 Tourism boom in Vietnam: Change or pay the price

Visitors are coming in droves to popular destinations in Vietnam, which in turn requires authorities to come up with assertive measures to deal with the negative effects brought about by overtourism.

A boom in tourism has resulted in a lot of consequences in famous places across the Southeast Asian country, namely Da Lat, Vung Tau, Da Nang, and Phu Quoc among others.

In Da Lat, a city blessed with beautiful natural landscapes and year-round favorable weather in the Central Highlands province of Lam Dong, local residents are getting tired of the increasingly frequent traffic jams and rising tourist nunmbers.

“My daily activities have been turned upside down. The city is swarming with visitors while the local infrastructure is not capable of meeting such a high demand,” said Tran Phong Nha, a 32-year-old resident.

Water and power cuts often occur during peak seasons, Nha said, adding that authorities have been unable to solve the problem.

Meanwhile, the population here is only around 300,000.

Lam Dong Province currently has more than 1,350 hotels offering 20,220 rooms, most of which are situated in Da Lat.

Homestays have also been mushrooming across the province.

A tourism official has voiced his concern over the rapid growth of Da Lat’s tourist sector.

The more is not the merrier

Another overtouism 'victim' is the central city of Da Nang, home to some of Vietnam’s most beautiful beaches.

The number is expected to reach 9.5 million in 2020 given the current growth.

Similar to Da Lat, traffic congestion is becoming a headache, while power and water outages have plagued such districts as Son Tra and Ngu Hanh Son due to the high number of hotels amd resorts.

However, small-scale hotels only reach a 10 percent occupancy rate during low seasons.

Con Dao Islands off the southern province of Ba Ria-Vung Tau are also seeing an increase in the number of visitors, while their only port is running down.

Electricity is another aching problem as most power on the islands comes from diesel.

On Phu Quoc, a tourist island off the southern province of Kien Giang, environmental pollution is becoming alarming as the local treatment facility only meets 90 percent of the daily demand.

Such crimes as thefts and robberies are on the rise.

About 4.3 million visitors came to Kien Giang in the first half of this year, while tourism revenue topped VND4.2 trillion ($180.6 million), up 42 percent year-on-year.

Change or pay the price

According to a recent report by the World Bank, Vietnam has experienced a boom in both inbound and outbound tourism over the past decade.

The number of international arrivals to Vietnam has nearly quadrupled during this period, from 4.2 million in 2008 to 15.5 million in 2018.

Domestic tourism, which is significantly greater in volume than arrivals from abroad, witnessed a similar surge - a fourfold increase in the number of domestic trips, from 20.5 million in 2008 to 80 million in 2018.

Brian Mtonya, a senior economist at the World Bank, suggested that Vietnam should not sacrifice its environment and cultural assets, which are very important factors, in exchange for tourist growth.

It is time for Vietnam to make strategic decisions to ensure long-term sustainability, Mtonya stated.

If no action is taken, the country could face the consequences of overtourism and environmental, cultural, and social degradation, according to the World Bank report.