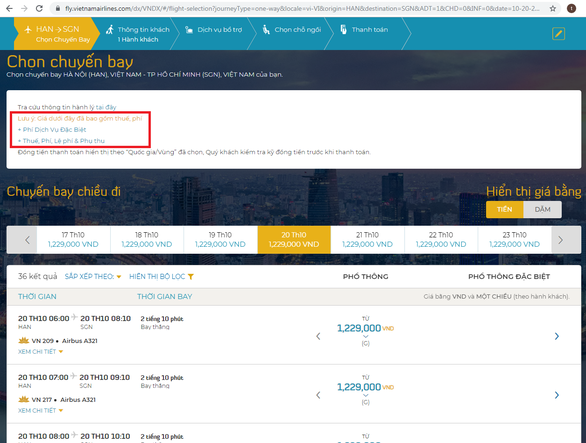 Low-cost airline Vietjet Air has accused Vietnam Airlines of obscuring the components of their airfares by listing only gross fares on their booking site, after the national flag carrier  earlier this month proposed that all airlines in Vietnam must follow the same fare-listing practice.

In a letter sent to the Price Management Department under the Ministry of Finance on September 3, Vietnam Airlines cited a 2013 government decree which stated that the listed prices of goods and services must include all taxes and fees, if there are any.

The Civil Aviation Administration of Vietnam has also issued specific instructions for Vietnamese airlines to follow the same decree in listing airfares, Vietnam Airlines wrote in the letter.

The national flag carrier added it was following the decree by listing gross fares - which include ticket price, airport tax, service fee and more - from the start of any booking on its website, while some other airlines only show the full fare a few steps down the booking process.

The carrier also attached to its letter screen grabs of booking screens of Vietnam Airlines, Bamboo Airways, and Vietjet Air to demonstrate its point.

Vietnam Airlines said such inconsistency in following state regulations could cause confusion among customers and generate misconceptions about the difference in fares offered by airlines, hurting its competitiveness on the market.

The national carrier requested that measures be taken to ensure all airlines in Vietnam strictly follow fare-listing regulations.

Vietjet has dismissed Vietnam Airlines’ accusations in a letter submitted to the Price Management Department this week, adding that it was Vietnam Airlines which was not being transparent when it comes to listing fares.

Instead of listing the net fare - which is the ticket price - and the other taxes and fees separately, Vietnam Airlines has chosen to include all of these factors in a gross fare, which bars customers from knowing the detailed components that make up their airfare, Vietjet claims.

“Customers are even automatically charged for services they might not actually need, including a 20-kilogram checked baggage allowance and in-flight meals,” said Vietjet vice general director Nguyen Thanh Son in the letter.

“That is unreasonable and not in the best interest of customers."

In addition, Vietjet said, current regulations, including international ones, do not require that airlines must list the taxes and fees together with the ticket price - only that they must be listed.

“With the current regulations, there is not enough legal basis to claim which airfare listing practice follows or goes against the law,” Vietjet said.

Even Jetstar Pacific, which is majority-owned by Vietnam Airlines, does not list gross fares on its booking site so it’s “unreasonable” for the national flag carrier to demand that other airlines follow such practice, Vietjet said.