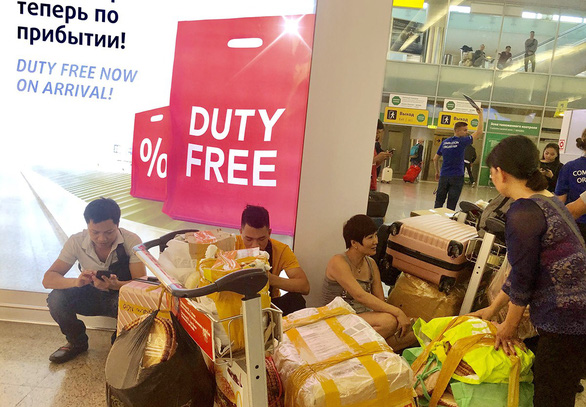 Transnational retailing through airways has become a popular way to earn a living among Vietnamese people for the past two years, in which they sell traditional foods and herbs from their hometowns.

A journalist of Tuoi Tre (Youth) newspaper on his flight from Hanoi to Moscow had a chance to get more information about this special livelihood through small talk with retailers who accounted for more than a quarter of the passengers.

Le Thi Oanh, a 35-year-old living in Hanoi, said she gave up her job as a garment worker two years ago for an offer of retailing local goods overseas from a friend, which later earned her family a more decent income.

She takes up to 15 round-trip flights each month from Hanoi to sell specialties of her hometown including Vietnamese herbs, traditional desserts or fruit at Mokka Market in central Moscow and brings home luxurious perfumes, clothing items and edible products within a day to prepare for the next “business trip.”

“We hardly have time to relax and enjoy scenic sites where we sell our goods,” said Oanh about her job while having her brunch on the plane.

“As long as my children are well supported, my effort is worth it,” said another retailer named Nguyen Van Luyen about his decision to do this job.

Oanh opened up about her effort to purchase discounted flight tickets to make an extra income, but she sometimes made a loss on buying high-priced tickets at peak times to maintain the long-lasting business with international partners.

She also said airport security checks were so strict that she had to carefully pack goods with unpleasant odors such as durians or fermented foods and weighed them precisely to make sure they would make it through.

“We always try our best to follow the rules and stay away from illegal business,” she added.

H., a retailer from Thanh Hoa Province, shared that Vietnamese people living overseas, especially in Moscow, always seek for a traditional home meal when they are away, so local specialties immediately capture their hearts when being displayed at the market.

“They are willing to pay up to eight times the price to have a Vietnamese signature meal,” she said.