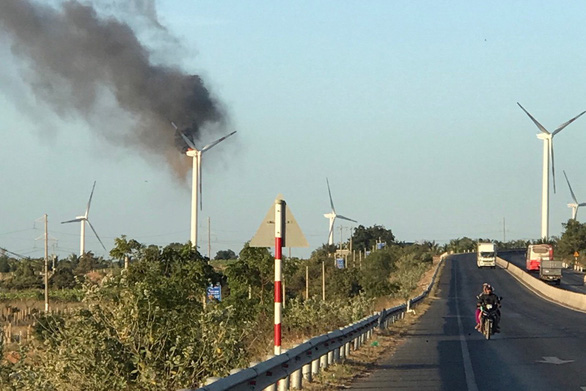 Damage estimated to amount to VND70 billion (US$3.02 million) has been caused after a wind turbine was destroyed by a fire in the south-central province of Binh Thuan on the weekend.

The wind turbine, with a power-generating capacity of 1.5 megawatts, burst into flames at around 7:00 am on Sunday.

It is one of 80 turbines belonging to the Binh Thanh Wind Power Plant in Tuy Phong District, Binh Thuan.

Plant workers, local police officers, and firefighters fought to extinguish the fire but the turbine had been irreversibly damaged after the fire had been out.

Its supporting pillar was also badly deformed due to the heat.

It was reportedly the first wind turbine fire on record in Vietnam, which launched its first wind power project in April 2012.

More costs are expected to surface as the plant operator dismantles the structure for repair, he said.

“The cost of repair and maintenance accounts for two percent of the value of the turbine, or some VND1.4 billion [$60,331] a year,” Thinh told Tuoi Tre (Youth) newspaper.

“That is too much for the operator, especially when wind power businesses are making a loss,” Thinh complained.

According to Tuy Phong chairman Huynh Van Dien, Sunday’s blaze has been attributed to a technical fault.

Nguyen Phu Hien, head of the project development of a wind power plant in the neighboring province of Ninh Thuan, told Tuoi Tre that the incident could have been prevented if the turbine had been properly maintained.

Hien added that the destroyed turbine is one of the very first wind power turbines installed in Vietnam.

The Binh Thanh Wind Power Plant was developed by the Vietnam Renewable Energy Co. Ltd. at a cost of about VND2 trillion ($87 million) and with a capacity of 120 megawatts.

Launched in 2012, it is also the first wind power plant in Vietnam, generating about 85 million kilowatt hours per year, according to Thanh Nien (Young People) newspaper.

By the end of May 2019, seven wind power plants had been in operation for a total of 331 MW in the country, according to 'Options for wind power in Vietnam by 2030,' a 2019 paper by Duong Minh Ha, executive chairman and researcher at the Vietnam Initiative for Energy Transition Social Enterprise.