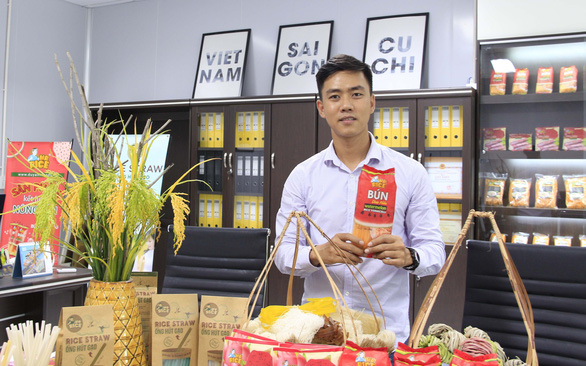 A Vietnamese man made a trade-off between an opportunity to settle down in the U.S. and returning to Vietnam to realize his dream of introducing the traditional ‘banh trang,’ known in English as rice papers, to the world.

The man is Le Duy Toan, 32, who finished his four years at the California State University with a degree in business administration.

Upon his graduation, Toan chose to come back to his hometown in Cu Chi District in Ho Chi Minh City, where Phu Hoa Dong Village - famous for making rice papers - is located, to revive its fading traditional craft.

The decision came unplanned as Toan had always thought he would stay in the U.S after his study.

A shopping trip at a U.S. supermarket changed his mind when he saw a pack of rice papers labeled 'Made in Thailand' on display there.

“As far as I know, Thailand does not produce rice papers, while Vietnam does. I was pissed off by this,” Toan told Tuoi Tre (Youth) newspaper.

“I wished to stamp rice papers my family make with the 'Made in Vietnam' label and put them on U.S. supermarkets’ shelves,” he said.

This drove Toan to return home in 2010 and establish Duy Anh Food Company and its facilities with VND500 million (US$21,368) in his hands to start his rice-paper-exporting business.

The first step is always the hardest as he failed to offer his rice papers to about 20 importers in different countries, including Japan and the U.S., and even domestic companies.

“At that time, I felt like I was going down a blind alley,” Toan said.

Fortune only smiled on Toan when a group of Japanese tourists were introduced to Phu Hoa Dong’s rice paper craft during their visit to the historic Cu Chi Tunnels.

Toan got this chance to gift each member in the tourist group a pack of his rice papers.

Weeks after the meeting, one of the tourists contacted Toan to negotiate importing his rice papers into Japan.

But that did not mean Toan could immediately post his products abroad as the Japanese side required strict quality testing.

Toan’s rice papers only passed the testing round to be exported to Japan after his 13th attempt.

“That was the turning point as my foreign customers then gradually recommended my products to other importers in other countries,” the man said.

He also promoted his rice papers on online trading platforms.

An incident put a damper on Toan’s business only a year after it went into operation when a fire caused by electric problems burned his production facility to ashes, resulting in a loss of VND3 billion ($128,084).

Then a 12-metric-ton shipment of Toan’s rice papers was canceled at the port of Incheon in South Korea due to quality inadequacy.

According to Toan, his company has so far exported rice papers to as many as 42 countries around the world, including the U.S. – his target destination.

“Actually, the first market I targeted was the U.S., not Japan. At that time, I thought I had to bring my rice papers to America to replace the 'Made in Thailand' ones at all costs,” he said.

“Perhaps, it was fated that I met Japanese and South Korean customers first before the U.S.”

The company’s rice papers have been recognized by the U.S. Food and Drug Administration and met all standards to be served to Jews.

Toan compared his happiness when receiving exporting orders to planting a flag on a mountain’s peak after conquering it.