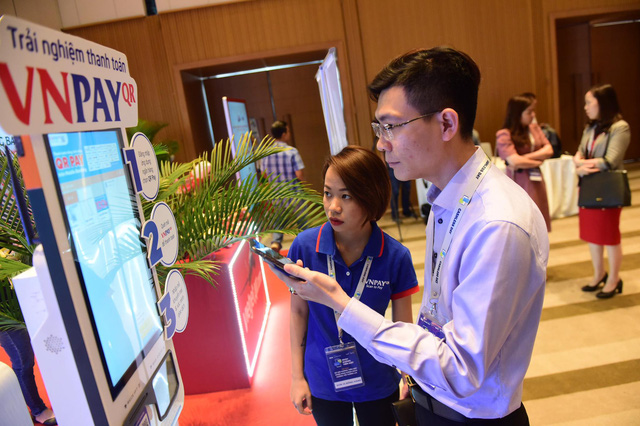 The municipal leader was speaking at a seminar on building a cashless society on the occasion of the forthcoming Cashless Day 2020 on Tuesday, June 16.

The event was organized by Tuoi Tre (Youth) newspaper in coordination with the State Bank of Vietnam (SBV), the Vietnam E-commerce Association, and the National Payment Corporation of Vietnam in Ho Chi Minh City on Friday.

Vice-chairman Tuyen said the city is on course to build a smart city whose main priority is to develop a cashless society.

Cashless payment among patients and students has produced satisfactory outcomes so far, according to the official.

He said students at a staggering 80 percent of city schools no longer pay their tuition fees in cash since 400 public schools have started collecting tuition via bank transfer.

Meanwhile, half of the city’s healthcare services have allowed patients to pay fees the cashless way.

However, according to Tuyen, many public facilities have not yet gone cashless.

He pledged that the municipal government would team up with relevant stakeholders to fast-track cashless payment among public services this year.

SBV vice-governor Nguyen Kim Anh said the legal framework for electronic payment is being amended to fall in line with payment activities, especially the adoption of new technologies that aim to encourage non-cash transactions.

Anh revealed the SBV had recently submitted to the central government a draft decision piloting mobile money, which allows the use of a mobile account balance for small-value payments.

The e-payment ecosystem has become widely available in the Southeast Asian country and been connected to various sectors, enabling customers to make online payments for electricity and water bills, shop on e-commerce platforms, as well as pay taxes and some public service fees.

The central bank intends to boost card payment, facilitate the switch to chip cards from magnetic-stripe ones, and make it easier for other industries to participate in the cashless ecosystem in order to diversify payment services.

Online tax payment on the rise

As of late 2019, a whopping 99 percent of active businesses had signed up for online tax payment, according to Ly Thi Hoai Huong, vice-director of the Department of Tax Administration for Small and Medium-Sized Enterprises, Household Businesses, and Individuals under the General Department of Taxation.

At least 53 local and foreign banks and 12 providers of intermediary electronic data transmission services joined the efforts to provide taxpayers with tax declaration and payment services.

A host of policies have been rolled out in recent years to facilitate non-cash payment in the taxation sector, Huong said, noting that there remain several bottlenecks.

One barrier involves the habit of taxpayers who are reluctant to employ technologies.

Meanwhile, the adoption of e-public services among state agencies has yet to be in tandem with one another, making it tough for businesses to pay taxes.

Many ministries and central agencies have yet to develop a centralized database system, so banks are unable to introduce cashless payment services in this regard, said Pham Tien Dung, head of the SBV’s Payment Department.

“They have failed to meet common standards,” he said, adding that joint efforts among various departments are needed.

‘Cashless Day’ was first suggested by Tuoi Tre Editor-in-Chief Le The Chu in January 2019, with June 16 being the designated date.

The annual event is meant to solicit ideas and suggestions from SBV officials, economic experts, financial specialists, and representatives from several local commercial banks on what can be done to minimize cash use in Vietnam.