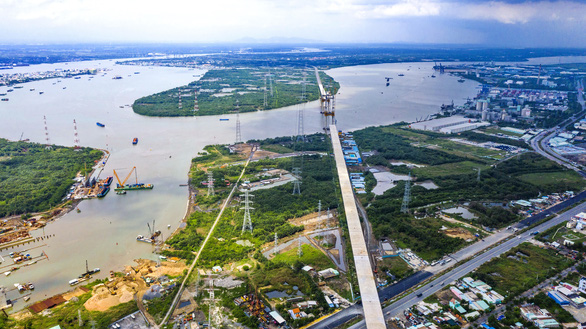 Experts have advised the government to found a special investment council and create an infrastructure investment fund for Vietnam’s southeastern region to support its development.

The advice was given at the 'Promoting Infrastructure Connectivity in the Southeastern Region' seminar co-organized by Tuoi Tre (Youth) newspaper, the Government Portal, the Ho Chi Minh City Institute for Development Studies, and the Party Committee and People’s Committee of Ba Ria – Vung Tau Province on November 22.

Nguyen Duc Kien, head of the prime minister’s economic advisory team, told the seminar that the PM and deputy prime ministers’ directives promoting key traffic projects in the southeastern region, such as Long Thanh International Airport and expressways, are proof of the government’s focus on infrastructural development in the region.

Specifically, Kien pointed out that Ring Road 3 and Ring Road 4 in Ho Chi Minh City are far behind schedule, with only a few small portions of the roads currently under construction despite completion deadlines set for 2020.

Lich also emphasized the importance of focusing on infrastructure investment in the southeastern region in order to boost its economic development, particularly as the region is a major contributor to the country’s socio-economic development.

In order to increase infrastructure connectivity in the region, he suggested comprehensive traffic investment in several specific projects.

“Investment in Long Thanh International Airport and Cai Mep – Thi Vai Port will not only benefit Dong Nai Province and Ria – Vung Tau, but it will also help with boosting traffic connectivity in the entire region,” Lich said.

A regional council, a regional fund

Truong Van Phuoc, a member of the prime minister’s economic advisory team, with support from those in attendance at the November 22 seminar, advocated for the establishment of a regional council and a regional infrastructure investment fund.

A regional infrastructure investment fund, regardless of the participation of state, private, domestic, or foreign investors, will help smooth the development of new projects, Phuoc said.

Leaders from southeastern localities will take up seats in the fund’s management board, which will be responsible for selecting infrastructure projects for investment.

Meanwhile, a regional council with a rotating chairman would be able to help determine which infrastructure projects should be given priority.

The council would be charged with approving new projects and coordinating resource procurement with the national government.

According to Tran Hoang Ngan, head of the Ho Chi Minh City Institute for Development Studies, a regional council could help create a mechanism for local and state budgets to drive funds toward connectivity projects.

“If southeastern localities can cooperate, they will be able to benefit from mutual development,” said Ngan.

The southeastern provinces, as well as Ho Chi Minh City, in the southern economic region have played a decisive role in contributing to national economic growth. This is a region with dynamic economic development and is one of the world’s top 20 locations for deep-water port development. The future operation of Long Thanh International Airport will create multi-modal connections and open up new economic development spaces, new opportunities, and new driving forces for regional growth.

Still, the southeastern region is facing overloaded infrastructure, a lack of proper investment, and is missing synchronous and sustainable connectivity, which has causes a slowdown of economic growth.

Solutions to infrastructure connectivity proposed at the seminar will not only contribute to the government and central agencies, but also be very practical for localities.

Currently, the southeastern provinces and Ho Chi Minh City hand over 75-76 percent of their budget revenues to the central government, while only keeping just of 24-25 percent for investment and expenditures. Regarding their important role in the country’s economy, it is necessary to consider adjusting the above rates in the direction of increasing the amount of retained local budgets.

Infrastructure connectivity in the southeastern region will create favorable conditions for the economic development of this region as well as the increase of revenue and investment resources for other regions across the country.

Tuoi Tre held the 'Promoting Infrastructure Connectivity in the Southeastern Region' forum with the orientation of providing solutions to the country’s issues that are associated with the general development and have direct impacts on people’s lives.

Many ideas and suggestions have been sent to Tuoi Tre in the hope that they can help solve difficult problems in infrastructure connectivity.

Through the Tuoi Tre-hosted forum, those daring proposals have reached competent government agencies, contributing to promoting national socio-economic development and improving the quality of people’s lives and businesses.