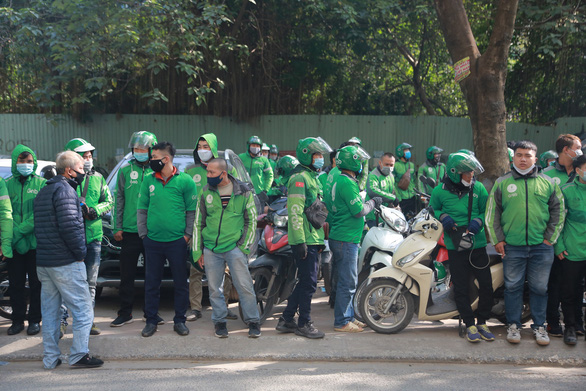 Hundreds of Grab partners went on strike in Hanoi on Monday morning to oppose the ride-hailing firm’s higher fare and collection of increased value added tax (VAT) ahead of time, without any notification in advance.

The Grab office in Hanoi’s Cau Giay District was swamped by large, green-clad-rider crowds demanding the company to reimpose its previous rate of commission.

The strike came after Grab had increased the fares for its services by five to six percent.

The fare hike was meant to make up for an increase in VAT charge on the Grab services from three percent to ten percent, starting December 5, as per the government’s decree, while guaranteeing the income of Grab drivers.

However, many Grab drivers believed that the fare increase would hurt customers’ demand.

In addition, the partners disagreed that the new VAT is charged on their own income while it should be the firm to pay for that amount of tax.

Many drivers also took to social media platforms to complain that they have been paying the increased VAT from November.

According to some drivers for GrabExpress – the delivery service, the ride-hailing company increased its commission rate from 20 percent to 27.273 percent and started charging the partners at that higher rate since mid-November, earlier than the date they had been informed the increases would take effect.

Hundreds of Grab drivers thus congregated at the company’s offices in Cau Giay District on Monday morning to voice their disapproval of the firm’s action.

They turned off their mobile app to not receive bookings, asking for a meeting with Grab Vietnam regarding the higher charge.

The gathering caused traffic congestion in the area, prompting the local police to arrive at the place to ensure public order.

On Sunday afternoon, a Grab Vietnam representative affirmed with Tuoi Tre (Youth) newspaper that it was not the case that the firm raised the commission rate.

Specifically, Grab has been taking a 20-percent commision of the total fare of each ride.

Meanwhile, the VAT amount has been reduced from the remaining 80 percent of fare that the drivers receive. It means that passengers are the ones that pay for the VAT.

The company, as the party that is responsible for fulfilling customers and drivers’ tax duties, will collect the two aforementioned amounts altogether.

Therefore, the elevated amount compared to normal that Grab Vietnam collected from drivers in November, the representative explained, comes down to the new VAT rate of ten percent, not the commission ratio.

The VAT amount that Grab collects will then be handed over to the State Treasury.

However, due to a technical error, its mobile app for drivers showed that Grab Vietnam began collecting money from the partners at the new rate since November, instead of December 5 as prescribed.

But in the firm’s revenue system, the actual amount that Grab received was calculated with the old VAT rate of three percent, the representative said, adding that only a small number of its GrabExpress partners suffered from the error.

“We are fixing this error in the server in Singapore,” the representative affirmed.