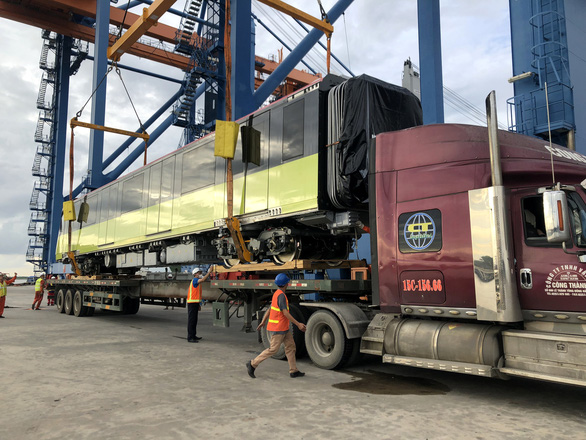 The last train of the second urban railway project in Hanoi was shipped from France to Hai Phong Port on Thursday and will be transported to the capital city soon, the Hanoi Metropolitan Railway Management Board (MRB) reported.

This project, the Nhon - Hanoi railway station route, has a rolling stock of 10 trains designed by French manufacturer Alstom, with the first train delivered to the port of Hai Phong City on October 18, 2020.

The trains, each of which has four carriages, can operate continuously on the standard gauge railway of 1.435 meters.

The train body is made of aluminum alloy, which is light, durable and environmentally friendly.

With their low floors, the trains are convenient for passengers to get on and off, especially those bringing luggage or using wheelchairs.

Each passenger carriage is 210 centimeters high from the floor, has four benches especially designed to save space and optimize the number of passengers, and is equipped with anti-glare glass.

Every train has a two-way air-conditioning system ensuring the difference in temperature inside and outside is no more than 10 degrees Celsius, a camera system, a fire and smoke alarm system, and LED lights with automatic light intensity controllers.

Currently, the metro project’s interlock and automatic protection systems are under trial run.

Upon official operation, eight of the 10 trains will operate continuously while another is put on standby and the other is used in emergency cases.

At present, the installation of information and signal systems, as well as the electricity supply, from station S01 to station S08 has been finished and training on controlling those systems is underway.

As of August, construction had been 74 percent complete while its elevated works had reached a completion rate of 89.41 percent, according to the MRB.

The section, the second route after Cat Linh – Ha Dong in the capital city, is slated to run 12.5 kilometers from Nhon in Nam Tu Liem District to the Hanoi Railway Station in the downtown area.

It will include 8.5 kilometers on elevated tracks and four kilometers underground.

Due to the COVID-19 impacts, the contractor is likely to miss the deadline of putting the elevated part of the route into operation at the end of this year, said the MRB.